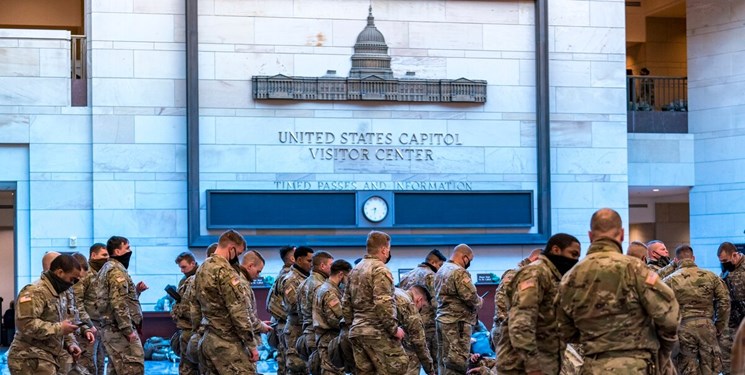 Metropolitan Police Chief Robert Contee said Wednesday, "I think you can expect to see somewhere, upwards beyond 20,000 members of the National Guard that will be here in the footprint of the District of Columbia", Newsweek reported.

Pictures circulated on Wednesday showed hundreds of uniformed and armed troops sleeping on the floor of the Capitol as lawmakers voted to impeach Trump for the second time; The first president in history to be impeached twice.

The House of Representatives voted to impeach the commander in chief after the Capitol building was stormed by a pro-Trump mob last week. Five people, including a police officer, died in the violence, which sent lawmakers from both parties fleeing the House and Senate chambers in fear of their lives.

Biden's inauguration has been designated a "national special security event".

Contee added Wednesday that the final number of National Guard troops could change and NPR reported that the Secret Service would decide how many should be deployed to protect the event.

Only those who serve as military police or have law enforcement experience will be armed, according to an anonymous official who spoke with NPR. They will be drawn from all states, the official stated, and will have access to their weapons but will not carry them.

Tensions remain high after last week's violence, with internet chatter among right-wing extremists suggesting that at least some will try to disrupt the inauguration, either in Washington or at other capitols around the country.

Trump issued a statement Wednesday urging "NO violence, NO lawbreaking and NO vandalism of any kind", though continues to falsely claim the election was stolen from him.

The current president's inauguration was also highly charged, given the divisive nature of the campaign in which he defeated Democratic candidate Hillary Clinton in 2016. Then, some 8,000 National Guard troops were on hand to protect his inauguration.

President Barack Obama's second inauguration in 2013 was supported by around 6,000 members of the National Guard.

Obama's first inauguration ceremony in 2009 was supported by some 10,000 guardsmen. They were on hand to help authorities deal with a record-breaking crowd of spectators who turned out to see America's first Black president sworn into office.

They were also there to ensure security amid concerns that racist and right-wing extremists might try to disrupt the event or even attack the new president.