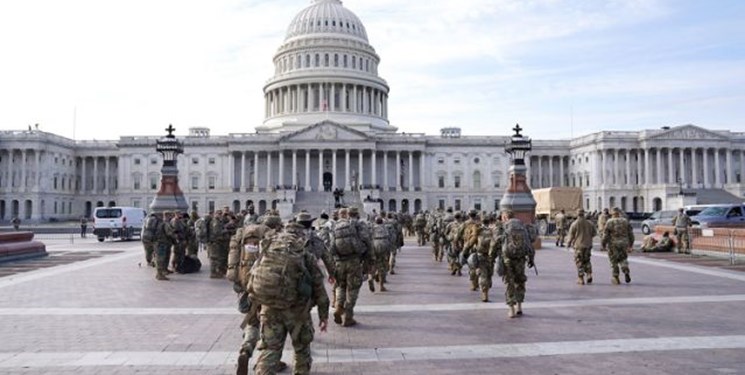 TEHRAN (FNA)- A Virginia man was arrested at a Washington checkpoint near the Capitol with an "unauthorized" inauguration pass, a gun and more than 500 rounds of ammunition, according to Capitol police.

The suspect, identified as Wesley Allen Beeler, 31, was stopped at the checkpoint near Lower Senate Park about 6:30 pm Friday, an arrest report said, NBC News reported.

An unregistered gun and hundreds of rounds of ammunition were found inside the truck that was adorned with gun decals days ahead of President-elect Joe Biden's inauguration, according to Capitol Police.

The man described the situation to the Washington Post as "an honest mistake". Beeler said he has been working as a security guard in downtown Washington, was running late and forgot that his gun was in the vehicle. He said he's licensed to carry in Virginia.

He denied to the Post that he had all that ammunition.

Beeler, of Front Royal, Virginia, allegedly presented an "unauthorized Inauguration credential" to a Capitol Police officer, authorities said. They did not describe what sort of document he showed that raised suspicion.

The arrest comes after the violent January 6 riot at the Capitol where supporters of President Donald Donald Trump and his unfounded claims of election fraud stormed the building in a violent siege that left five people dead and many more injured.

The suspect's Ford F-150 pickup displayed weapons-related stickers, including one that read, "Assault Life", and another that said, "If they come for your guns Give 'Em your bullets first", police said.

Beeler allegedly declared that he had a Glock handgun under an armrest, and a subsequent search found nearly 550 rounds of ammunition, including a loaded magazine, clipped into the Glock, with 16 rounds, authorities said. An additional round was in the chamber of the handgun, they said.

News of the arrest Saturday came as protesters, some armed, descended outside state capitals, including in St. Paul, Minnesota and Austin, Texas.

On Friday the Texas Department of Public Safety announced it was closing the state capitol and nearby grounds from Saturday through Wednesday.

"The Texas Department of Public Safety is aware of armed protests planned at the Texas State Capitol this week and violent extremists who may seek to exploit constitutionally protected events to conduct criminal acts," public safety director Steven McCraw said in a statement, adding, "As a result, DPS has deployed additional personnel and resources to the Capitol."

The US Postal Service said in a statement that blue collection boxes at several locations across the country "will be temporarily removed as a security measure to protect the mail and the public".

The inauguration-related removals apply to select locations in 14 states, including Arkansas, Arizona and California, the service said. In Washington, D.C. the postal service is temporarily removing or locking boxes, closing some facilities and suspending delivery for much of next week.

Boxes near the capitol in Harrisburg, Pennsylvania, will be "taken out of service" Tuesday through Thursday, local postal officials said in a statement Saturday.

In Sacramento, California, the California Highway Patrol was on tactical alert, which allows for longer shifts, in preparation for inauguration-related protests.

On Friday Daniel Baker of Tallahassee, Florida, was arrested by the FBI authorities after allegedly issuing a "call to arms" for an armed confrontation at the Florida Capitol on Sunday. The region's federal public defender did not immediately respond to a request for comment.

"He specifically called for others to join him in encircling any protestors and confining them at the Capitol complex using firearms," the US Attorney's Office in the Northern District of Florida said in a statement.

Police in Charleston, South Carolina, said Saturday they responded to minor vandalism, including putty placed on a door handle and lock, at the Charleston County Democratic Party Headquarters, authorities said.

Investigators found flyers on scene that read, "the world is watching", and that had profanity about President-elect Joe Biden, police said.

More than 100 people have been arrested in connection with the January 6 riot. A criminal complaint unearthed Saturday revealed details of federal allegations against Anthime Joseph Gionet, known on social media as "Baked Alaska".

Allegations include "violent entry" and "disorderly conduct" at the Capitol. An affidavit states that Gionet livestreamed video of the Capitol invasion and said, "Unleash the Kraken, let's go", while he was inside the building.

On Saturday the US Attorney for the Middle District of Tennessee announced the Capitol riot-related arrest of Lisa Eisenhart.

"Charges include conspiring with her son, Eric Munchel to violate federal statutes," the office tweeted.

Biden is scheduled to be sworn in on Wednesday at the Capitol.