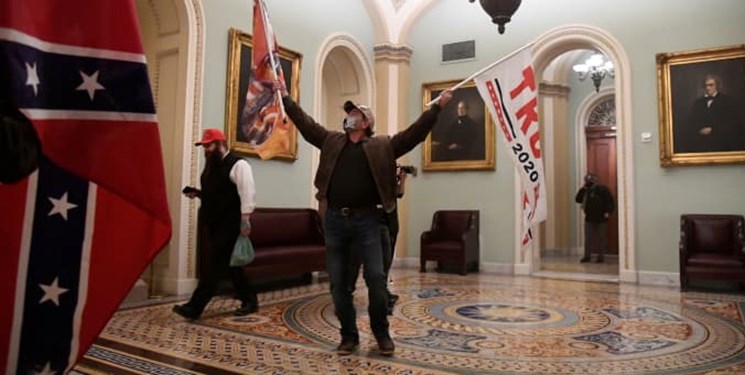 TEHRAN (FNA)- Capitol Police said Friday that they are investigating allegations by Democratic members of Congress that Republican lawmakers gave tours of the Capitol to supporters of President Donald Trump a day before a pro-Trump mob rioted there.

Rep. Mikie Sherrill, D-N.J. had said Tuesday that on January 5 she saw “members of Congress who had groups coming through the Capitol ... a reconnaissance for the next day”, CNBC reported.

She has said that tours were highly unusual both because of the timing just before the invasion of the halls of Congress, and because of COVID-19 restrictions that have limited public access to congressional buildings.

On Wednesday, Sherrill and more than 30 other Democrats in Congress in a letter asked Capitol Police and the acting sergeants at arms in both the House and Senate to investigate the “suspicious behavior and access given to visitors to the Capitol Complex” on January 5.

Eva Malecki, spokeswoman for the Capitol Police, told NBC News on Friday, “it is under investigation”.

The January 6 riot caused members of Congress, along with Vice President Mike Pence, to flee ongoing proceedings in the Senate and House of Representatives to seek safety in secure locations, while a horde of Trump supporters rampaged through the complex.

Five people died during the riot, including a Capitol Police officer, Brian Sicknick, who was killed by members of the mob.

House Speaker Nancy Pelosi, D-Calif, on Friday warned of possible criminal prosecutions if a member of Congress is found to have abetted the rioters.

“When we’re talking about security, we have to talk about truth and trust,” Pelosi said at a news conference.

“In order to serve here with each other, we must trust that people have respect for their oath of office, respect for this institution,” she said.

“If in fact it is found that members of Congress were accomplices to this insurrection, if they aided and abetted the crime, there may have to be actions taken beyond the Congress in terms of prosecution for that,” the speaker said.

The violence at the Capitol complex began after Trump spoke to supporters during a rally on the Ellipse outside the White House, and urged them to march to the Capitol in protest of ongoing proceedings there to confirm Joe Biden’s election as president.

Trump was impeached by the House on Tuesday for inciting the riot.

Rep. Eric Swalwell, a California Democrat, on Monday tweeted a claim that Rep. Pete Sessions, a Republican from Texas, had “met with terrorists who attacked Capitol and killed an officer. He told them to ‘keep fighting.’ They listened”.

Swalwell, added that, “Out of a consciousness of guilt Sessions deleted this tweet”.

But Swalwell included an image of Sessions’ now-deleted tweet from January 3, which said, “Had a great meeting today with folks from ‘Stop the Steal’ at our nation’s Capitol.”

“I encouraged them to keep fighting and assured them that I look forward to doing MY duty on January 6th,’” Sessions wrote.

Sessions deleted that tweet on January7, a day after the riot.

A spokesman for Sessions did not immediately respond to a request for comment Friday.

The riot interrupted the confirmation by a joint session of Congress of Biden’s win in the Electoral College.

After the proceedings resumed on the evening of January 6, Sessions joined more than 100 Republicans in the House in voting against accepting Biden’s wins in Arizona and Pennsylvania.