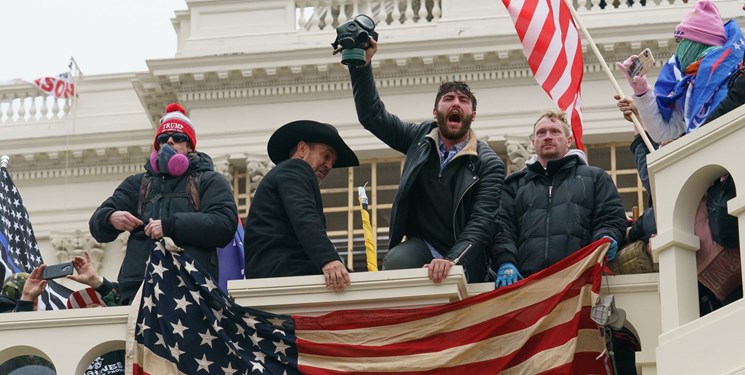 TEHRAN (FNA)- Police seized an alarming number of guns from President Donald Trump's supporters who descended on Washington, D.C., last week and stormed the Capitol in an effort to stop Congress's certification of the 2020 election results.

The details revealed in court documents over the past week paint a disturbing picture indicating that some of the demonstrators flocked to the Capitol prepared to carry out violence. The cases, likely only the beginning of a lengthy federal investigation, also suggest that the riot that overran the halls of Congress and left five people dead could have been much worse, The Hill reported.

One man, Lonnie Coffman, is facing multiple weapons charges after police say they found him in possession of five guns, eleven Molotov cocktails, a crossbow, smoke bombs and a stun gun.

Coffman was arrested only because police were investigating pipe bombs that were discovered near the Capitol at the Republican Party and Democratic Party headquarters and noticed one of the guns in his truck while securing the area.

Authorities have said they don't believe Coffman was behind the pipe bombs and have yet to identify a suspect.

In charging documents filed with the federal district court in D.C., police said they searched Coffman’s truck while sweeping the areas around the pipe bombs, finding the weapons along with hundreds of rounds of ammunition and a list of public officials and journalists that identified them as “good guys” and “bad guys”.

“In the end, this is a defendant with access to firearms and numerous other lethal weapons, dangerous incendiary mixtures creating napalm, who appears to have been motivated to conduct violence against our elected representatives,” prosecutors wrote in a court filing.

“The defendant brought these weapons to the immediate vicinity of the US Capitol Building, and traveled to the area with two firearms on his person. The amount of weapons suggests an intent to provide them to others, as no one person could reasonably use so many at once,” they added.

A man named Cleveland Meredith, who traveled from Colorado in order to participate in the protests at the Capitol, was arrested at his hotel in D.C. last week after law enforcement received a tip that he had threatened to kill House Speaker Nancy Pelosi (D-Calif.). Meredith told investigators that he mistakenly arrived in the District a day after the riot.

The FBI said in court documents that it found a handgun, an assault rifle and hundreds of rounds of ammunition in Meredith’s trailer and text messages on his phone in which he talked about killing Pelosi and told a friend “headed to DC with a shit ton of 5.56 armor piercing ammo [purple devil emoji]”.

Prosecutors have also charged two men who were seen in social media images carrying plastic flex cuffs, which are plastic restraints often used by military and law enforcement when detaining groups of people.

One of those men could be seen sporting what appeared to be a weapon in a holster on his hip in pictures of him inside the Capitol. The day of the riots, FBI identified the man as Eric Munchel, of Nashville, Tenn., and arrested him at his hotel in D.C.

He was carrying a Taser in a holster when he was arrested, which he told investigators was for protection, according to an affidavit from an FBI agent.

Another man, Christopher Alberts of Maryland, was arrested on the Capitol grounds as police were clearing the building when an officer noticed that he was carrying a pistol.

The defendants’ attorneys did not respond when asked for comment.

The gun charges that have emerged in court over the past week are only a fraction of the more than 70 cases that federal prosecutors have filed in the wake of the riot. And Justice Department officials have suggested that many more are likely to be charged in the coming days as their investigation unfolds.

It’s unclear just how many of the rioters were armed as they stormed the Capitol, forcing Vice President Pence to evacuate and hundreds of lawmakers to flee both chambers.

Those who have already been charged may be only a small percentage of the total number of armed rioters given the prevalence of firearms at right-wing demonstrations across the country in the past year.

And according to numerous media reports, there’s mounting evidence that the demonstration was organized in advance, with some Trump supporters discussing plans for violence online.

“All this bullshit about not bringing guns to D.C. needs to stop,” one Trump supporter wrote in an online forum, according to BuzzFeed, adding, “This is America. F--- D.C. it's in the Constitution. Bring your goddamn guns.”

Michael Sherwin, the acting US attorney for D.C., has said in recent days that investigators are only beginning what will likely be a lengthy probe into the debacle and that his office is exploring severe charges such as sedition for some of those who were involved.

"We're looking at and treating this just like a significant international counterterrorism or counterintelligence operation," Sherwin said at a press conference this week.

"We're looking at everything: money, travel records, looking at disposition, movement and communication records. So no resource related to the FBI or the US attorney's office will be unchecked in terms of trying to determine exactly if there was a command and control, how it operated and how they executed these activities," Sherwin

Joyce Vance, a former US attorney in Alabama under the administration of Barack Obama, suggested that a priority for federal prosecutors will be those who may have helped incite and solicit violence as well as those who brought guns to the riot.

“Anytime you've got someone engaging in criminal activities who's willing to take a gun along with them, they become that much more dangerous and that much more deserving of scrutiny from law enforcement,” Vance told The Hill.

She added that one of the more disturbing issues surrounding the riot is all the open questions about the mob and said it’s up to federal prosecutors to provide answers.

“We still don’t know the full scope of what happened,” Vance said, adding, “There's a lot that suggests that we narrowly avoided a really spectacularly horrible incident last Wednesday."

“We need our prosecutors and our law enforcement people to do their job and tell the country definitively what happened,” she said, adding, “And then we need them to hold the people responsible accountable.”