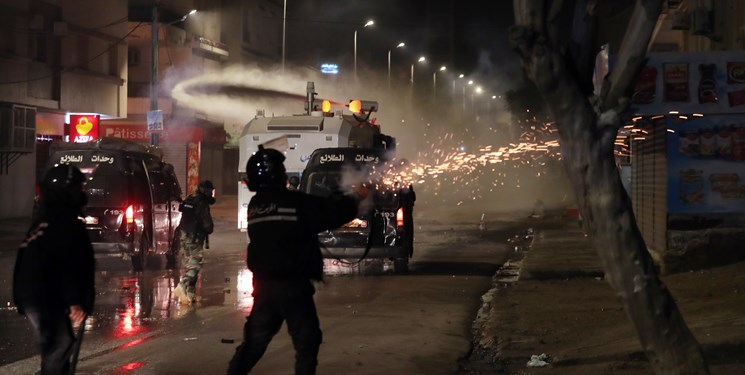 TEHRAN (FNA)- Tunisians are protesting the detention of hundreds of young demonstrators arrested over several nights of disturbances, demanding their release and venting their anger against the government’s handling of a deepening social crisis.

Approximately 100 people rallied in the capital, Tunis, and the city of Sousse on Wednesday in defiance of gatherings banned following a recent surge in coronavirus cases, Al-Jazeera reported.

“We want the detainees to be freed,” the protesters cried in Sousse.

In Tunis, protesters – many of them students – shouted slogans from the country’s 2011 revolution, including “freedom, work, national dignity”, as they moved along the capital’s arterial Habib Bourguiba avenue.

Daytime protests in recent days demanding jobs, dignity and the release of detainees have been followed by nighttime violence, with COVID-19 restrictions compounding a wider economic malaise.

The protests come as the economy is in free-fall, youth unemployment soaring and anger rising against a political class that has shown itself incapable of pulling together for the nation – gripes in sharpened focus as the country last week marked 10 years since the fall of former leader Zine El Abidine Ben Ali.

On Tuesday, Prime Minister Hichem Mechichi acknowledged Tunisians’ “legitimate” anger in a televised address but said the violence was “unacceptable” and promised to “confront it with the force of law”.

“Your voice is heard and your anger is legitimate … do not allow saboteurs among you,” he added, addressing protesters.

Hundreds have been arrested since the nighttime clashes erupted late last week amid a four-day lockdown.

Tunisia often sees protests around such key anniversaries in January, but this year’s clashes come as the coronavirus pandemic has deepened socioeconomic woes.

Much of the unrest has hit working-class neighbourhoods.

Clashes also took place in Kasserine, Kairouan and Kef, according to National Guard spokesman Houssemeddine Jebabli, who stated a further 41 people had been arrested.

The Interior Ministry announced on Monday more than 600 people had been arrested.