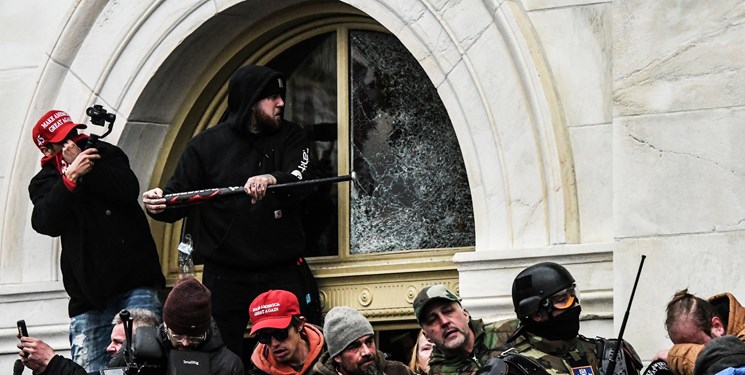 TEHRAN (FNA)- Federal investigators have begun piecing together evidence that some of the insurrectionists who stormed the Capitol on January 6 were executing well-laid plans, deploying communications systems and issuing marching orders to rioters as they battled police, according to reports.

A new affidavit filed Tuesday by the FBI described preparations by the right-wing Proud Boys to storm the Capitol, including using earpieces and walkie-talkies to direct movements throughout the building and a discussion about wearing black to dupe people into blaming antifa for any trouble, POLITICO reported.

A separate criminal filing released Wednesday afternoon — charging Patrick McCaughey III for pinning a police officer with a shield, which led to a now-iconic image of the brutality of the insurrection — described leaders among the rioters issuing marching orders to more effectively fight police.

“Unidentified rioters are heard instructing the front line of rioters to make a ‘shield wall‘ to prevent law enforcement from controlling rioters with oleoresin capsicum spray,“ according to the affidavit from a deputy US marshal.

At a hearing on McCaughey’s case on Wednesday afternoon, a federal magistrate judge in White Plains, N.Y., ordered the 23-year-old Connecticut native detained pending trial on charges of assaulting police officers, civil disorder, entering a restricted building or grounds, and violent entry or disorderly conduct. The ruling to hold McCaughey without bail came after prosecutors emphasized the level of coordination in the attack.

“Mob is not the right term, because there’s a level of organization here that bears noting,” Assistant US Attorney Benjamin Gianforti said, adding, “The rioters are swapping in people here who are fresh. They’re passing weaponry to the front of the scrum to use against officers.”

The new court filings were the latest indications that the January 6 riots included cells of organized, militarized insurrectionists, beyond the rabble of disorganized Trump supporters who joined the fray. That evidence includes the conspiracy case filed this week against three so-called Oath Keepers, members of an Ohio-based chapter of the loosely connected paramilitary group, who face charges of seeking to injure police officers, obstruct Congress and damage federal property.

FBI and Justice Department officials have emphasized in recent days that they expect the investigation to lead to grave criminal charges that could include seditious conspiracy. But the early rush of criminal complaints has focused largely on trespassing, disorderly conduct and impeding police — charges that prosecutors say were the fastest and most sure-fire way to bring some of the rioters into custody while more detailed and damning cases are developed.

Then-President Donald Trump was impeached during his final week in office for inciting the violent insurrection. Many participants in the riots openly cited Trump’s false claims that the 2020 election was stolen as a basis for their decision to storm the Capitol. Trump urged the crowd to march on the Capitol and later told the rioters “we love you” — asking them to go home peacefully — even as lawmakers and then-Vice President Mike Pence were sheltering amid the violence. Though some pleaded with Trump for pardons, citing his encouragement of the event, Trump left office without moving to shield himself or the participants in the riots from the legal fallout.

The latest round of filings included charges against Joseph Biggs, whom the FBI describes as a Proud Boys “organizer”. According to the affidavit, Biggs encouraged other members of the group to attend the January 6 events in D.C. and echoed Proud Boys leader Enrique Tarrio’s suggestion that they dress to appear like adherents of antifa, a violent left-wing movement.

Biggs was also on the front lines of the group that first breached the Capitol, according to the FBI, along with Dominic Pezzola, another Proud Boys member who was charged for his role in the assault earlier in the week.

“In one image … Pezzola appears to have what I believe to be an earpiece or communication device in his right ear,” says the unnamed FBI agent who filed the case.

“Your affiant also notes that multiple individuals were photographed or depicted on videos with earpieces, including other individuals believed to be associated with the Proud Boys,” the agent added.

The agent also noted that Biggs and other Proud Boys used walkie-talkies during the siege. Biggs spoke to FBI agents after he was identified in videos and “denied having any knowledge of any pre-planning of storming the Capitol, and had no idea who planned it”.

Prosecutors and investigators described McCaughey’s conduct as exceptionally depraved. Videos of the episode show Officer Daniel Hodges of the D.C. police grimacing and crying out in pain as he is pinned between a door jamb and a mob surging against him.

“The vicious attack on Officer Hodges was abhorrent and quintessentially un-American,” said Michael Sherwin, the acting US attorney for the District of Columbia, adding, “McCaughey’s alleged actions were an assault on Officer Hodges, the Capitol and the rule of law itself.”

However, aspects of an affidavit that a deputy US Marshal submitted to a federal magistrate judge in Washington to get an arrest warrant for McCaughey hinted at possible defenses in the case.

While surveillance and body-worn camera video appear to leave little doubt that McCaughey was pinning Hodges even as he cried out in agony, the events in the tunnel on the west front of the Capitol were chaotic and at times there appeared to have been a horde of angry rioters surging against the police and the doors.

The marshal, whose name was deleted from the public court record, asserts that in one recording taken near McCaughey someone can be heard saying, “Come on man, you are going to get squished just go home.”

However, McCaughey is not on camera at that moment, and the affidavit acknowledges at another point that he seems to express concern for Hodges, stating, “Hey you, hey you, this guy isn’t doing too well.”

The marshal says that after Hodges was moved behind the police line, McCaughey continued to bash other officers with the shield and by that time the crowd behind McCaughey had thinned out, undermining any defense he might have that he was being jostled by others.

“At the time of the strikes, no other rioters are in contact with McCaughey that could have caused McCaughey to somehow inadvertently move towards uniformed law enforcement officers,” the marshal wrote.

During the hearing in New York, prosecutor Gianforti noted McCaughey’s actions “struck at the heart of American democracy”.

Gianforti added the video of the episode provided overwhelming evidence of McCaughey’s guilt.

“This video is crystal clear,” the prosecutor continued, stating, “The officer’s fear and just the frenzy of that moment are palpable from the video.”

Gianforti also said the intense anger McCaughey and others displayed in the attack could not have waned significantly in the two weeks that have passed.

“Whatever was in their hearts that day,“ he added, that has not been “extinguished”.

Defense attorney Justin Ser did indeed argue that McCaughey wasn’t in total control of events in that doorway, given the chaotic scene and the large crowd.

“That’s only part of the story here,” Ser said of the prosecution’s account, adding, “Mr. McCaughey is nowhere near as maniacal and dangerous as the government is making him out to be.”

“He was in that mob,” Gianforti countered, adding, “He made his way to the front of that mob.”

In turning down Ser’s request to have McCaughey’s parents post a bond to secure his release, Magistrate Judge Andrew Krause called the video “extraordinarily disturbing.”

“The nature and circumstances of the offense absolutely support detention here as a danger to the community,” the judge said.

Krause, who is based in Westchester County, where McCaughey was arrested on Tuesday, said it was laudable that McCaughey expressed concern for the officer after he appeared to be injured. However, the judge announced that hardly excused the defendant’s conduct.

“That’s great. I’m glad to know that’s within him,” the judge stated, adding, “That doesn’t wipe away what happened before then.”

McCaughey will be sent to Washington for further court proceedings, but his transfer could take weeks or longer because of delays related to the COVID-19 pandemic, Gianforti continued.