Poll: Americans View Other Americans as Biggest Threat to Their Way of Life 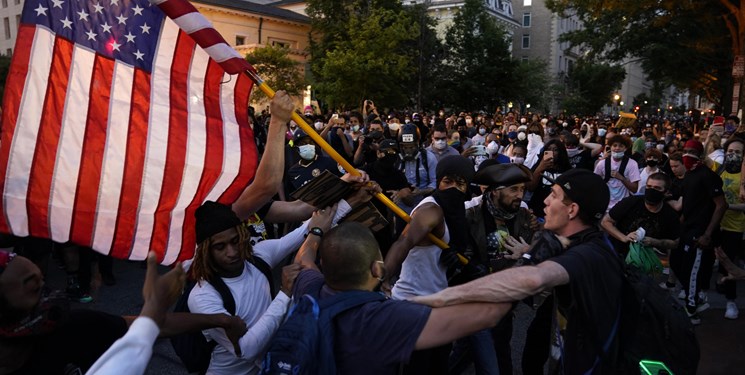 TEHRAN (FNA)- Americans today increasingly view “other people in America, and domestic enemies” as the biggest threat to their way of life, a new poll found, underlining how deep the political and cultural divides run in the United States.

Most Americans – 54 percent – now believe that other Americans pose the biggest threat to their way of life as opposed to foreign adversaries and economic forces, according to a new CBS News/YouGov survey.

Unlike other issues, there is bipartisan agreement on the most significant challenge to the nation’s way of life, with 53 percent of Democrats, 56 percent of Republicans, and 57 percent of Independents describing others in America as the biggest risk.

Only one in five Americans surveyed chose economic forces as a greater threat and a fewer 17 percent said natural disasters and viruses were a key concern to them.

Remarkably, the poll also revealed that only a meager 8 percent of Americans believe that other countries pose the most imminent threat to the American way of life, an indication of how disconnected the US government’s perception of threats has actually been from that of the public.

The survey was conducted prior to the inauguration of President Joe Biden and marked the end of Donald Trump’s presidency, which saw thousands of Trump supporters, enraged by his claims that the election was stolen, lay a violent siege to the US Capitol.

While a majority of Americans said they were optimistic about Biden as president, they are still bracing for more political violence over the coming years.

Healing political divisions looks to Americans like a much bigger challenge for President Biden — far harder than dealing with the COVID-19 pandemic or any other issue in the country.

Forty-two percent of those surveyed described political divisions as the biggest challenge facing the new president, while 15 percent said it was the pandemic. Fourteen percent picked the economy and 12 percent chose race relations.

Americans also continue to hold a very low opinion of the state of the nation’s democracy and rule of law, with only 6 percent describing it as “very secure”. Twenty-nine percent of respondents said it was somewhat secure and the rest said it was threatened.

Just as a sign of how difficult the task of healing America’s political divides would be, the poll found that most Trump voters- 63 percent—hold unfavorable views toward not just Biden, but those who voted for him.

In his inaugural address on Wednesday, Biden acknowledged the deep political divide in America and vowed to end the “uncivil war” and strive to restore democracy.

“We must end this uncivil war that pits red against blue, rural versus urban, conservative versus liberal. We can do this - if we open our souls instead of hardening our hearts,” Biden said as the ceremony unfolded in font of a heavily-fortified Capitol building.