'President Threw Us Under Bus': Trump's Intelligence Chief Blames Him for Failing to Call Up National Guard 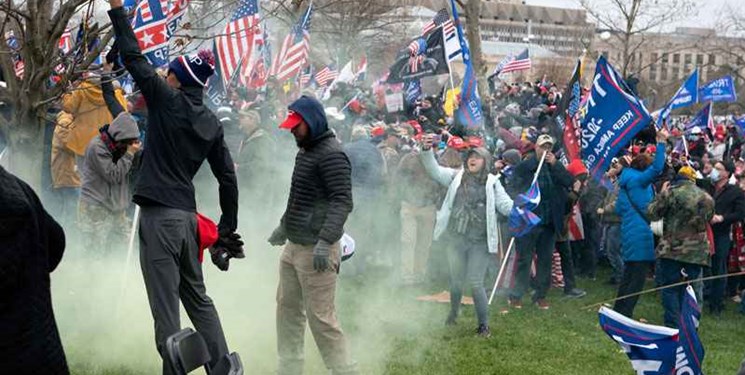 TEHRAN (FNA)- Former President Donald Trump has been accused of throwing his top Pentagon officials "under the bus" in the aftermath of the Capitol insurrection, as his Defense Secretary claimed that the president said 10,000 troops would be needed on January 6 - but failed to issue orders.

Christopher Miller, who until Wednesday was the Defense Secretary, told Vanity Fair that when Trump made him head of the Pentagon, in November, "the bar was pretty low".

Miller also said the Pentagon was in a terrible state.

He told of his horror of watching the scenes on January 6 unfold, and said the root of the problem was Trump's decision to teargas protesters outside the White House over the summer. That led to the mayor of DC vowing that she did not want the National Guard to be present en masse for the Stop the Steal rally, which preceded the riot.

Ezra Cohen, the 34-year-old fiercely loyal Trump servant, appointed on November 10 to be Acting Under Secretary of Defense for Intelligence and Security, was even more blunt in his assessment.

"The president threw us under the bus," he said, adding, "And when I say 'us,' I don't mean only us political appointees or only us Republicans. He threw America under the bus. He caused a lot of damage to the fabric of this country.

"Did he go and storm the Capitol himself? No. But he, I believe, had an opportunity to tamp things down and he chose not to. And that's really the fatal flaw. I mean, he's in charge. And when you're in charge, you're responsible for what goes wrong," he said.

Miller told how, on the eve of the riot, he spoke to Trump.

Trump asked about security for the rally the following day.

"We're like, 'We're going to provide any National Guard support that the District requests," Miller responded.

Miller said that, on the day of the riots, he had the sense that something dramatic was going to happen.

He said he was hopeful that the day would prove uneventful. But decades in special operations and intelligence had honed "It was the first day I brought an overnight bag to work", he told the magazine.

Miller said that he and his team "were monitoring" the situation as Trump held his provocative rally.

"And we're just like, Please, God, please, God," he said, adding, "Then the damn TV pops up and everybody converges on my office."

Miller said, "We had already decided we're going to need to activate the National Guard, and that's where the fog and friction comes in."

He denied that he had struggled to get hold of the president, or that former Vice President Mike Pence was in charge, and his chief of staff, Kash Patel, said that they sent in the National Guard when the mayor of DC, Capitol Police and Secret Service finally asked for it.

Miller, asked about criticism that the Pentagon was slow to send in troops, replied, "Oh, that is complete horses***. I gotta tell you, I cannot wait to go to the Hill and have those conversations with senators and representatives."

He added, "I know when something doesn't smell right, and I know when we're covering our asses. Been there."

"I know for an absolute fact that historians are going to look…at the actions that we did on that day and go, 'Those people had their game together," he said.

Miller, a 55-year-old Special Forces veteran, also pushed back at criticism that he was brought in to replace Defense Secretary Mark Esper as a "yes man" for Trump.

"I'll just be straight up. My family's not huge fans of the Trump administration," he said, adding, "It's really bothered my daughters and my wife. My son, he'll be like, 'Holy cow, they called you a stuffed-shirt moron today."

He said he was particularly angry at the ranks of retired military officers who questioned his suitability for the role, including some of those who had trained him and worked for him.

In the aftermath of the January 6 violence, and with Trump impeached and in legal peril, Miller was asked how he felt.

"Have to compartmentalize because it's like being in combat. When you take casualties, you're just like, it's horrible. But I'll think about that later over some drinks when I get home," he said.

"I refuse to take the bait and get panicky. I have to portray that this is the Department of Defense. That's my Bill Belichick. Do your damn job. And I'm not going to go out and make some statement…. Right now the country just needs to take a quaalude," he said.

He felt that too much power had been transferred from the civilian leaders to the military commanders.

"When the system is weighted towards the Joint Staff and the geographic combatant commanders against civilian control, you know, we've got to rethink this," he said, criticizing members of Congress for "idolizing and fetishizing" senior military leaders.

Cohen, head of the DIA, the military intelligence, told the magazine, "We're in a crisis mode".

He said he and others had discovered that the Joint Chiefs were creating their own "security compartments" containing operational planning details "for the express purpose of hiding key information from career civilian and political leaders in the Pentagon".

Cohen said, "That means that policymakers were basing their decisions on partial information. It's very dangerous and irresponsible, and that's something I've actually highlighted in my conversations with [Biden's] transition team."

Miller said, "The entire system, the intelligence community [included], is complicit in setting up all these compartments - so that only very select people actually have perspective and access to the entire picture. And then your question is, 'Well, who are these people that have the complete picture?"

"I felt like I finally did as acting SECDEF - to a point. I'm sure there's still some stuff that was being compartmented. But I don't know that for a fact," he said.