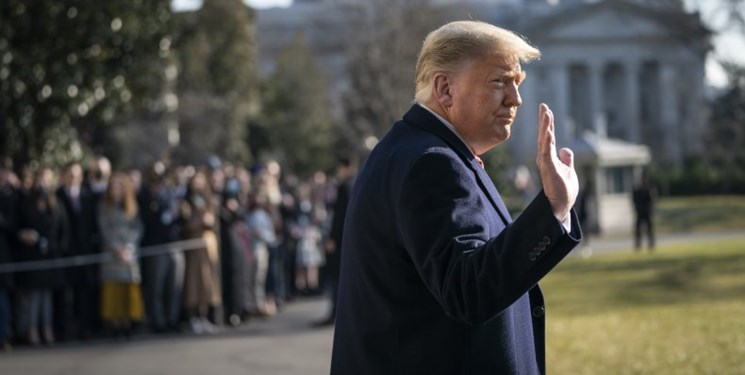 TEHRAN (FNA)- Former President Donald Trump is reportedly moving forward with his plans to create a "Patriot Party" to put pressure on Republicans who oppose him and attempt to head off conviction in his second Senate impeachment trial.

Trump has told people that the third-party threat gives him leverage to prevent Republican senators from voting to convict him during the Senate trial next month, people in his orbit told The Washington Post.

Since President Joe Biden took office, Trump has been ensconced at Mar-a-Lago, remaining publicly cryptic about his plans except to tell a reporter on Friday, "We'll do something, but not just yet."

But behind closed doors, Trump is already drafting an enemies list of Republicans who opposed his claims of election fraud, instructing aids to prepare primary challenges against them, sources told The Post.

The list is said to include the House's number three Republican, Rep. Liz Cheney of Wyoming, who broke party ranks and voted to impeach Trump over his role in the January 6 Capitol riot. Rep. Tom Rice, a South Carolina Republican, is on the list for the same reason.

Georgia Governor Brian Kemp is also reportedly on the list after provoking Trump's fury for refusing to back his challenge to the state's election results, which were certified for Biden.

Senator Lisa Murkowski, an Alaska Republican who has signaled that she is open to voting to convict Trump, is also said to be a Patriot Party primary target.

Kemp and Murkowski are both up for re-election in 2022.

Trump advisers say they plan to recruit opposing primary candidates and commission polling as soon as next week in districts of targeted lawmakers.

To fund his splinter party, Trump has more than $70 million in campaign cash on hand, the sources stated.

Though the Trump campaign was essentially tapped out on Election Day, the campaign and several allied groups raised $207 million between November 3 and November 23, fundraising on his push to challenged the election results.

The number is certainly higher by now, but hard numbers won't be disclosed to the Federal Election Commission until January 31.

Much of Trump's fate in the Senate trial will rest in the hands of Minority Leader Mitch McConnell, who has been cagey about his plans but publicly rebuked Trump after the Capitol riot, saying Trump had "provoked" the mob.

McConnell will have to weigh the exodus of corporate donations away from the GOP in the wake of the riot, against the risk of infuriating and alienating Trump's base by voting to convict.

A vote to convict could split the party, but some see it as the only way to unify Republicans, by banishing Trump to the sidelines and removing the source of the tensest divisions.

A conviction would also allow the Senate to bar Trump from holding federal office again, insuring Republicans would be able to put forward a slate of non-Trump candidates in their 2024 presidential party.

Because conviction requires a two-third vote in the Senate, at least 16 Republicans would have to join the 50 Democrats to secure a conviction.

Opening arguments in the trial will begin the week of February 8.

Meanwhile, the widening split in the Republican Party was on evidence on Saturday in Arizona, where state GOP officials voted to censure John McCain's widow Cindy McCain and two other prominent Republicans who bashed Trump's election fraud claims.

But they show strong elements of the party are focused on enforcing loyalty to Trump, even in the wake of an election that saw Arizona inch away from its staunchly Republican roots.

Party activists also reelected controversial Chairwoman Kelli Ward, who has been one of Trump's most unflinching supporters and among the most prolific promoters of his baseless allegations of election fraud.

The Arizona GOP's combative focus has delighted Trump's staunchest supporters and worried Republican insiders who have watched the party lose ground in the suburbs as the influence of its traditional conservative establishment has faded in favor of Trump.

A growing electorate of young Latinos and newcomers bringing their more liberal politics from back home have further hurt the GOP.

"This is a time for choosing for Republicans. Are we going to be the conservative party?" said Kirk Adams, a former state House speaker and chief of staff to Ducey, adding, "Or is this a party ... that's loyal to a single person?"

It's a question of Republican identity that party officials and activists are facing across the country following Trump's 2020 loss, and particularly after a mob of his supporters laid siege on the US Capitol on January 6.

Cindy McCain endorsed Biden and became a powerful surrogate for the Democrat following years of attacks by Trump on her husband.

After the censure vote, she wrote on Twitter that "it is a high honor to be included in a group of Arizonans who have served our state and our nation so well."

"I'll wear this as a badge of honor," she wrote.

Also after the vote, Flake tweeted a photo of him with McCain and Ducey at Biden's inauguration and wrote, "Good company."

Flake was one of the few congressional Republicans who was openly critical of Trump for failing to adhere to conservative values. He declined to run for reelection in 2018 and endorsed Biden in last year's election.

"If condoning the president´s behavior is required to stay in the Party´s good graces, I´m just fine being on the outs," Flake wrote on Twitter before and after the vote.

Ducey is being targeted for his restrictions on individuals and businesses to contain the spread of COVID-19. While it's not mentioned in the proposed censure, he had a high-profile break with the president when he signed the certification of Biden's victory.

"These resolutions are of no consequence whatsoever and the people behind them have lost whatever little moral authority they may have once had," noted Sara Mueller, Ducey's political director.