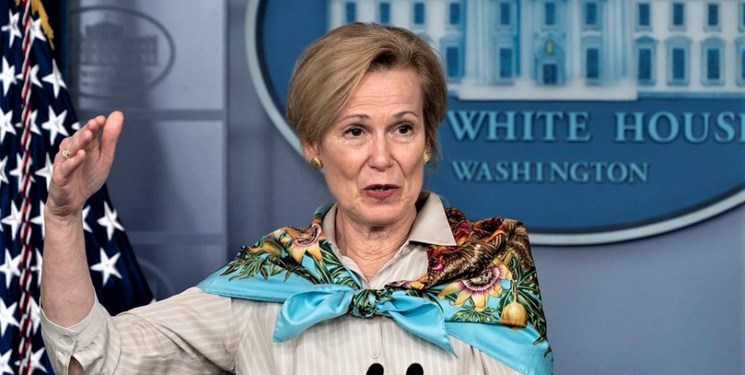 TEHRAN (FNA)- Dr. Deborah Birx claimed she was 'censored' by the White House and 'always' considered quitting Donald Trump's coronavirus taskforce - but she stayed in the role anyway.

Birx, who served as the White House coronavirus task force co-ordinator under Trump, told CBS Face The Nation she asked herself every morning and night if she could make a difference to tackling the pandemic that has so far left more than 400,000 Americans dead.

"I mean, why would you want to put yourself through that every day?" she said in a clip from the full interview set to air Sunday.

"I had to ask myself every morning, is there something that I think I can do that would be helpful in responding to this pandemic and it's something I asked myself every night," she said.

Birx said many close colleagues she had worked with during her long career before the White House started questioning whether she had become too political.

"Colleagues of mine that I had known for decades... decades in that one experience, because I was in the White House, decided that I had become this political person, even though they had known me forever," she said.

She admitted she was aware in the lead-up to the presidential election that the White House race had become a factor in what and how much was being communicated to the public about the deadly virus.

But while she claimed she was "censored" by the White House, Birx denied ever having withheld information on the pandemic herself.

Birx went on to admit that she reached a point where she felt she "wasn't getting anywhere" just before the election.

"When it became a point where I could - I wasn't getting anywhere and that was like right before the election, I wrote a very detailed communication plan of what needed to happen the day after the election and how that needed to be executed," she told CBS.

"And there was a lot of promise that that would happen," she added.

Birx announced in December she would "retire" from her role when President Joe Biden took office following a backlash after she broke her own coronavirus safety guidelines to celebrate Thanksgiving with her family.

Birx traveled out of state to Delaware for the weekend while the CDC was urging Americans not to travel for the holiday.

The career health official addressed the scandal saying it had taken its toll on her family and said she will retire "within the next four to six weeks" from the CDC.

"This experience has been a bit overwhelming," she said, adding, "It's been very difficult on my family."

Birx served as the US Global AIDS Coordinator for both President Barack Obama and Trump before she was appointed to the coronavirus taskforce in March taking on the very public role as one of the nation's top doctors in its fight against the pandemic.

During her time in the role, she came under fire from both sides.

In August, Trump called Birx "pathetic" when she warned Americans that the pandemic is "extraordinarily widespread" in the US.

Meanwhile, House Speaker and Democrat Nancy Pelosi once also described her as "the worst".

Birx had hoped to secure a job working under the Biden administration.

Sources said in December that she reached out to Biden's advisors to make the case for a role in his coronavirus response effort.

But she has yet to be tipped for an appointment and new White House Press Secretary Jen Psaki simply said "that's an excellent question" Friday when asked if Birx was still on the White House COVID-19 response team.

Birx's interview making thinly-veiled swipes at her former boss comes days after Dr. Anthony Fauci also took aim at Trump Thursday - the day after Biden took office - as the nation's top doctors finally speak out about what life was like in Trump's White House.

Fauci appeared in the White House press briefing room Thursday for the first time since last spring as he took up his role as Biden's chief medical advisor and member of the COVID-19 response team.

"Not point fingers but to correct them and to make everything we do be based on science and evidence," Fauci said.

"I mean that was literally a conversation I had 15 minutes ago with the president, and he has said that multiple times," he noted.

Nationwide, 414,000 people have died and 24.8 million have been infected with the virus.