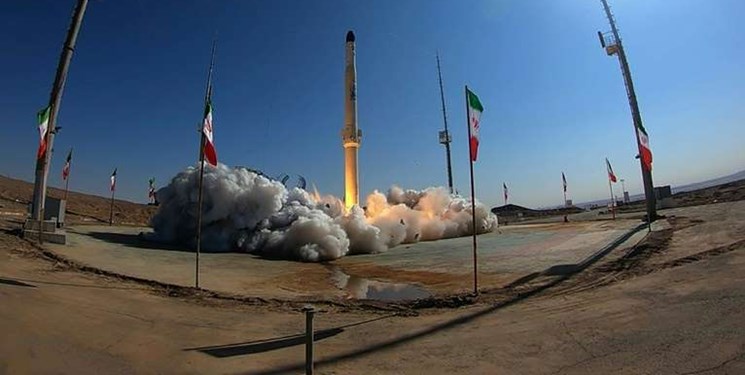 TEHRAN (FNA)- Iran has launched new satellite carrier “Zol Janah” which uses the most powerful solid fuel engine, a Defense Ministry Spokesman Ahmad Hosseini said, and noted that the vehicle uses solid in the first and second phases, and liquid fuel in the third phase.

“The new satellite launch vehicle is based on the most powerful solid fuel engine technology attained by the country’s specialists for the first time,” Ahmad Hosseini said on Monday in a televised program, adding that the new domestically-designed and manufactured satellite carrier is capable of putting satellites into an orbit of 500km above the ground.

“For the first time in the field of space science, the first test launch of Zol Janah satellite carrier has been carried out after achieving the most powerful solid fuel engine technology with the goal of conducting suborbital test,” Hosseini went on to say.

“The three-phase satellite carrier, which is comparable with the most state-of-the-art ones in the world in technical aspects, enjoys two solid thrust phases and one liquid thrust phase,” he added.

The spokesman also said that the launch carrier is capable of carrying a satellite weighing 220kg to an orbit of 500km above the ground.

Hosseini said one of the most important achievements of this test is making operational the country's most powerful solid fuel engine enjoying a 750-ton thrust.

“The satellite carrier will be ready to put operational satellites into orbit after the completion of research tests,” he noted, adding that reducing costs and increasing the speed of achieving goals are among its main features.

In relevant remarks in mid-August last year, Iranian Defense Minister Brigadier General Amir Hatami announced on Sunday that the country will send satellites into the space on the back of its two indigenized carriers named Simorq (Phoenix) and Zol Janah.

“The Islamic Republic of Iran has a permanent plan to develop its space program and it has passed several stages and has several stages ahead. The country needs heavier cargos over 100kg to be carried into the space and we plan to carry heavier cargos to the higher altitude orbits which will be done by Simorq and Zol Janah satellite carriers,” General Hatami told reporters in Tehran on the threshold of the Defense Industry Day in Iran.

He noted that Simorq satellite carrier is still in the research phase, hoped for its success in the next launch.

General Hatami explained that Zol Janah satellite carrier is also similar to Simorq in form and size but with a solid-fueled engine and can be launched from a mobile launcher.

“I think we will have both these satellite carriers this year,” he said, adding that Qassed satellite carrier which has been developed by the Islamic Revolution Guards Corps (IRGC) Aerospace Force will be used for smaller cargos.

“We have Sarir satellite carrier for cargos weighing between 300kg to 1,000 kg and we will, of course, have Soroush-1 and Soroush-2 satellite carriers for higher altitude orbits at 36,000km,” General Hatami said.