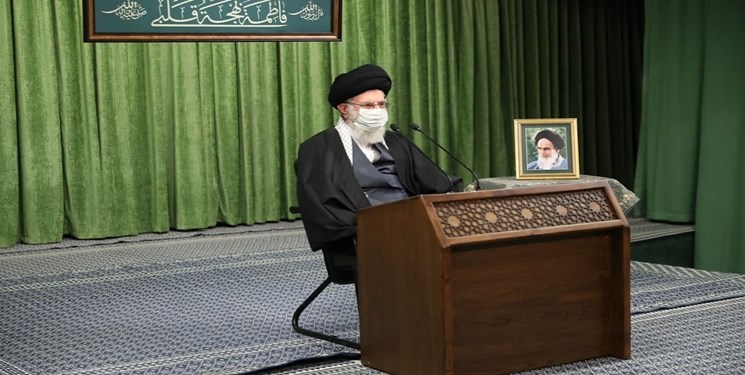 Ayatollah Khamenei, in a virtual meeting with eulogists, referred to the fundamental difference between Islam and the West towards women, saying, “Islam’s and the Islamic Republic’s view towards women is based on respect and dignity while the West considers woman as a commodity and instrument.”

“Islam considers no difference between men and women with respect to divine and human values,” he said, adding that men and women each have special duties in addition to their common duties and that is why God Almighty has created their physical structure in accordance with these special duties.

“We boast of the view of Islam and we totally protest the Western view of women and lifestyle,” the Supreme Leader went on to say.

Referring to the Western propaganda that claims Islam and the Islamic hijab prevent the growth of women, Ayatollah Khamenei reiterated, “This is sheer lie and the evident proof for its being unreal is the situation of women in the Islamic Republic.”

“Iran has not seen in its history this great number of educated women and women who are active in different social, cultural, artistic, scientific, political, and economic fields and this is a result of the Islamic Republic,” the Supreme Leader highlighted.

In relevant remarks in August last year, Ayatollah Khamenei said that the acute inefficiencies witnessed in the US have turned the country into a real model of failure in management of the human society.

“Human values ​​such as health, justice and security are being trampled on more in the United States than anywhere else,” Ayatollah Khamenei said in a virtual meeting with President Rouhani and his cabinet members on the occasion of the National Government Week on August 23.

“The social gap in the US is terrible; the number and proportion of hungry and homeless people in the United States is higher than the rest of the world,” he added.

Referring to the statistics revealed by US presidential candidates in their campaigns, the Leader said, “One out of every five American children is hungry, while insecurity and crime rates in the United States are also very high.”

Referring to the Americans' foreign policy throughout history, he said, "Murder, warmongering and creating insecurity are common actions carried out by the Americans in Syria, Palestine, and Yemen, and before that in Iraq, Afghanistan and areas such as Vietnam and Hiroshima.”

“Such factors and the presence of individuals who are the source of humiliation at the head of the US’ affairs, is another sign of the failure of the Westerners' human and utopian models.”