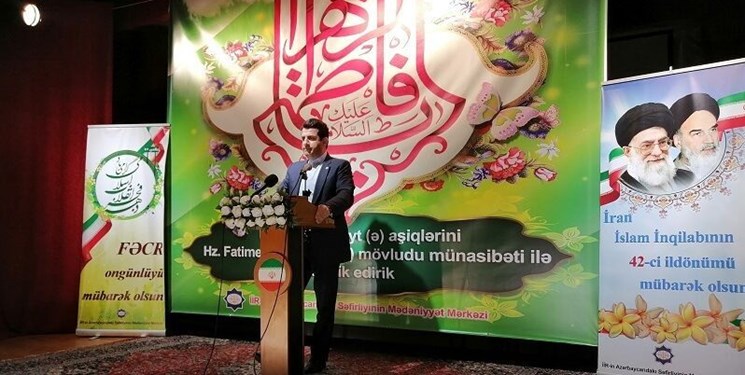 TEHRAN (FNA)- Iran's Envoy to Azerbaijan Seyed Abbas Mousavi said his country is after expansion of economic relations with Azerbaijan Republic based on good neighborly ties.

“Iran is seeking to promote its economic relations with the neighborly Republic of Azerbaijan,” Mousavi said in a ceremony in Baku on Thursday marking the 42nd anniversary of Islamic Revolution’s victory.

He also pointed to the birth anniversary of the revered daughter of the Great Prophet, Lady Fatimah (peace upon her) which is designated as "mother's day" in Iran.

The ambassador described Azerbaijan as a permanent friend of Iran with very warm relations.

Mousavi added that Iran has always supported the Republic of Azerbaijan.

He noted that the exchange of visits between presidents and other senior officials of the two countries indicate the importance of further relations in many fields.

In relevant remarks on Tuesday, Mousavi had underlined that cooperation between his country and the Republic of Azerbaijan have reached a satisfactory and strategic level of bilateral relations.

The Iranian envoy made the remarks in his meeting with Speaker of Azerbaijan’s National Assembly Sahiba Gafarova.

"The cooperation between the two countries is growing in different fields and the bilateral relations are entering a new phase," Mousavi said.

For her part, Gafarova said that historical, religious, and cultural commonalities between the two countries provide good conditions for further expansion of bilateral relations.

High-level political dialogue between Tehran and Baku has had a positive influence on trade ties, she said, adding that existing capabilities will make it possible to acquire higher trade levels.