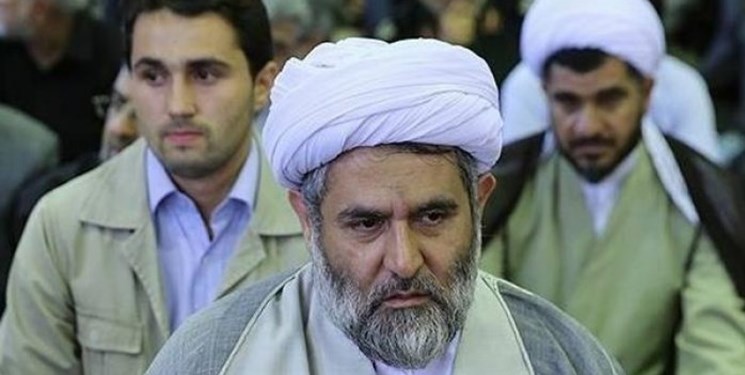 TEHRAN (FNA)- Head of the Intelligence Department of the Islamic Revolution Guards Corps (IRGC) Hojjatoleslam Hossein Taeb said that Iran and other members of the Resistance Front are in full consensus on the expulsion of the American forces from the region.

US expulsion from the region is one of the resistance front's unchangeable strategies, Taeb said on Wednesday, addressing a ceremony held to commemorate the 42nd anniversary of the victory of Iran's Islamic Revolution.

He also praised the nation and the establishment for the achievements made in the country after the revolution.

Taeb elaborated on enemy's strategic defeats against the Iranian nation, saying that the intelligence services of Iran are thoroughly informed of enemy plots.

He also said that the Americans sought to neutralize the power of the Islamic Republic of Iran, but the power and might of the great nation of Iran overcame their intention.

Taeb, meanwhile, said that the Iranian people and authorities all agree that the US is untrustworthy.

He pointed to the US assassination of the top Iranian anti-terror commander, Lt. Gen. Qassem Soleimani, and his companions in Iraq early last year, and said that the US expulsion from the region is one of the unchangeable strategies of the Resistance Front in the region led by Iran.

Taeb stressed that the US, the Zionist regime, and their tyrants are afraid of Iran's promised harsh revenge for the assassination of the members of the Resistance Front, saying that the fear of revenge will haunt them forever.

The intelligence official added the Americans will no longer be happy in this region, and warned the US-backed regimes in the region that they should also learn from the fate that awaits the American terrorist forces and not expose themselves further to the revolutionary wrath of the Muslim nations.

The head of the IRGC's Intelligence Organization also noted that the world is watching the disgraceful decline of the US, saying that the US power in all aspects is in decline.

He also said that the Iranian nation is preparing itself for the post-American era and its own growing role.

He added that "God willing we will expand our intelligence control over the enemy and close the way for their infiltration".

He hailed the preparedness of all intelligence apparatuses of the Islamic Republic to tackle the threats as well.

“Ending the US forces’ presence in the region will be the best reaction to this terrorist measure,” Zarif said in a meeting with his Iraqi counterpart Fuad Hossein in Tehran.

He appreciated Iraq for pursuing assassination of General Soleimani and Abu Mahdi al-Muhandis through judicial channels, and expressed the hope that the perpetrators and masterminds of the terrorist attack would be punished for their criminal acts.

During the meeting, the two sides also discussed bilateral ties and regional and international developments.