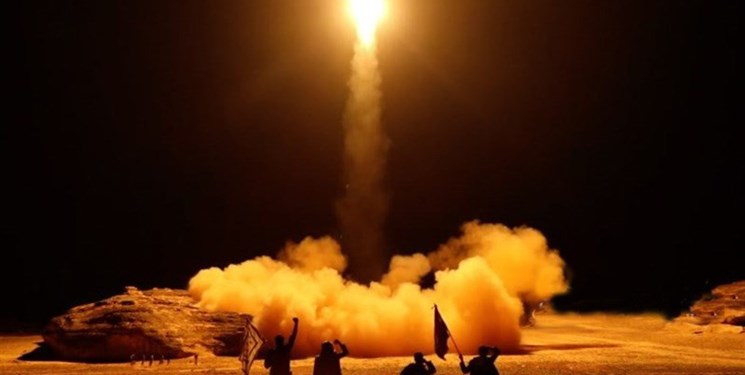 TEHRAN (FNA)- The spokesman for Yemeni Armed Forces said army troopers and allied fighters from Popular Committees have launched a missile attack on an airbase in Saudi Arabia's Southwestern region of Asir, in retaliation for a devastating war led by the kingdom against the impoverished country.

Saree said that the surface-to-surface ballistic missile used in the operation is of a new generation, which has not been unveiled yet.

The senior Yemeni official then warned Saudi Arabia that retaliatory attacks will continue as long as the Riyadh regime continues its military aggression, all-out siege and relentless raids against the war-ravaged Arab country.

Separately, Yemeni army forces, supported by allied fighters from the Popular Committees, have intercepted and targeted an unmanned aerial vehicle belonging to the Saudi-led military coalition while flying over Yemen's central province of Ma’rib.

Brigadier General Saree said Yemeni air defense forces and their allies shot down the CH-4 combat drone with a surface-to-air missile over the Medghal district early on Friday.

The unmanned aerial vehicle can fire air-to-ground missile from altitude of 5,000 meters, therefore it can stay outside of effective range of most anti-aircraft guns.

The European Parliament (EP) has called on EU member states to ban arms sales to Saudi Arabia and the United Arab Emirates for human rights abuses in war-torn Yemen.

The parliament, in a resolution passed on Thursday, recalled the German government’s ban on arms sales to the two Persian Gulf countries, and demanded European states to impose an EU-wide arms embargo on them.

European lawmakers highlighted that EU member states’ arms exports to Saudi Arabia and the UAE is in contravention of the Council of Europe's stature.

The resolution also welcomed the US decision to suspend arms sales to Saudi Arabia and defer the transfer of F-35 fighter jets to the UAE.

Military sources, speaking on condition of anonymity, added that scores of Hadi loyalists were killed or wounded.

The development came as heavy clashes have been going on between the Yemeni forces and Saudi-backed militiamen loyal to Hadi in Haylan and Makhdarah areas of the Sirwah district over the past few days.

Saudi Arabia and a number of its regional allies launched the war on Yemen in March 2015, with the goal of bringing the government of former president, Abd Rabbuh Mansur Hadi, back to power and crushing the popular Houthi Ansarullah movement.

The Yemeni forces and allied fighters from Popular Committees have gone from strength to strength against the Saudi-led invaders, and successfully defended Yemen against the Saudi aggression, leaving Riyadh and its allies bogged down in the county.