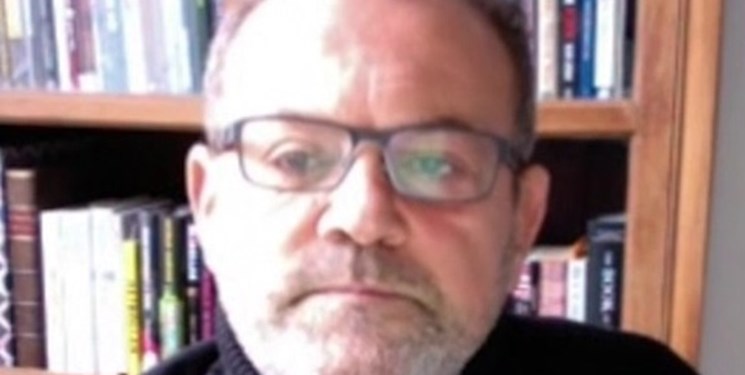 TEHRAN (FNA)- Elijah Magnier, veteran journalist and political analyst, says the Islamic Republic of Iran’s refusal to submit to the US and its allies is unique in the world.

Speaking in an interview with FNA, Elijah Magnier said world powers cannot stand the way Iran resists, and added, ‘In 1979, Iran declared itself an “Islamic Republic” following a referendum. It was the vote of the people to establish this regime and reject the US hegemony… Iran is supporting oppressed people around the world, and particularly in Lebanon, where a group of Lebanese threw out the Israeli aggressors. In Syria, IRI foiled the West’s plan to destroy the country and in Iraq it prevented its partition. So, we can see why it is so much hated by those who want to impose their own policy.’

Elijah J. Magnier is a veteran war correspondent and a Senior Political Risk Analyst with decades of experience covering the West Asian region specifically on the ground in Iran, Iraq, Lebanon, Libya, Sudan and Syria. He has worked as a field journalist in Iraq, Syria, Iran and Lebanon, covering the Iran-Iraq war, the 1982 Israeli invasion to Lebanon, the war in the former Yugoslavia from Bosnia and Croatia, the wars in Iraq and Syria, the 2006 second war in Lebanon, the war in Sudan, and the 2011 war in Libya.

Q: How do you find Iran’s position among the West Asian countries?

A: In 1979, Iran declared itself an “Islamic Republic” following a referendum. It was the vote of the people to establish this regime and reject the US hegemony. This is one of the “main sins” of Iran, refusing to submit to the Americans. The second main “sin” of Iran is its support for the return of Palestine to its people. Prior to 1979 and under the Shah – who was appointed by the US – Iran was an important source of oil for Israel. Ayatollah Sayyed Ruhollah Khomeini designated the last Friday of the month of Ramadan as an international day – Youm al Quds. The 1979 revolution refused to recognise Israel and moreover, it handed over the Israeli embassy to the Palestinians and renamed the street as Palestine Street. That means Iran is standing against a superpower in the Middle East and its main ally, which is of course considered unforgivable by the US, the superpower in question. Also, Iran is supporting oppressed people around the world, and particularly in Lebanon, where a group of Lebanese threw out the Israeli aggressors. In Syria, IRI foiled the West’s plan to destroy the country and in Iraq it prevented its partition. So, we can see why it is so much hated by those who want to impose their own policy on West Asia.

Q: The US officials (such as Mike Pompeo, Former Secretary of State, and John Bolton, Former National Security Advisor) did their very best to make a regime change in Iran before the revolution was 40. Why did they fail?

A: I consider the US “maximum pressure” on Iran was a blessing after all. Of course, it created a heavy burden on the population and the economy, but it forced the state to rely on itself and become independent in many sectors. Iran has its own oil and gas refineries, it produces its own medicines and pharmaceutical production, food and agriculture, cars and so many other first necessities. It is independent on Defence thanks to the sanctions and the animosity of its neighbouring countries, and the US with its 15 military bases around Iran. Iran is also exporting food, merchandise and electricity to Iraq. Therefore, the four harshest years on Iran during President Donald Trump’s rule proved how impossible it is to change the regime in Iran, enjoying as it does a democratically elected president and parliament and a regime that is supported by the majority of the population.

Q: One of the main goals of the Islamic Revolution has been supporting Palestinian resistance against Israeli occupation. How do you view that?

A: Following the Arab and Muslim countries’ normalisation with Israel, the Palestinians have realised that Iran, despite its majority Shia ruling party, is the only supporter of the Sunni Palestinians, a proof that Iran is not sectarian and really does support the cause of oppressed people around the world. The Palestinians have made many mistakes since the Oslo agreement: they wrongly believed the US to be a fair mediator for their cause and that Israel was ready to give part of the Palestinian territories back to their original owners. They were usually wrong in their choices but now they have returned to what Iran told them from the beginning: “we accept what you accept for your state”. The Palestinians today have found out that only the “Axis of the Resistance” never gave up supporting their one main cause, Palestine, and this notwithstanding the position of the Palestinian leaders themselves. Palestinians today now know that Iran was and still is the only country ready to really support them without asking for anything in exchange. This is rare in politics, especially in the Middle East.