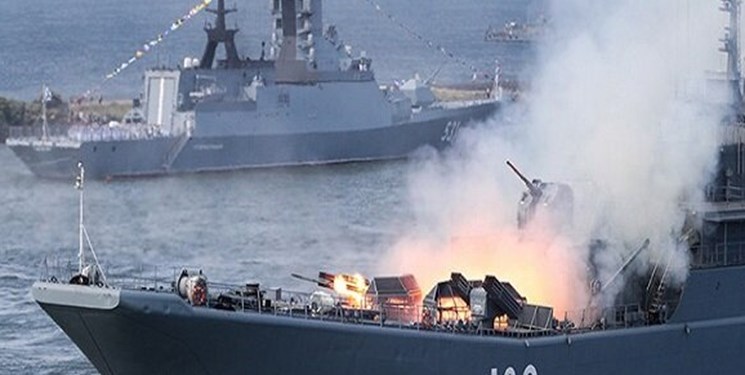 TEHRAN (FNA)- Iran and Russia kicked off joint naval drills in the Northern parts of the Indian Ocean, Spokesman for the Russian Embassy in Tehran Maksim Suslov announced on Monday.

"The drills have started today. We confirm this," Suslov said.

In a relevant development earlier on Monday, the Iranian Army's press office reported that Iran and Russia would begin joint naval drills in the Northern part of the Indian Ocean.

"The Iranian-Russian ‘Marine Security Belt’ drills will begin in the northern portion of the Indian Ocean tomorrow," the press office said in a statement.

A senior Iranian military official said the joint naval drill with Russia is aimed at contributing to maritime security and combating piracy and terrorism.

The spokesperson of the joint Iranian-Russian naval drill Rear Admiral Gholamreza Tahani on Monday said that the joint drill will be held with the slogan "Collective Cooperation at Sea for the Security of Maritime Trade" in a 17,000-kilometer area with a message of peace and friendship.

"In addition to surface and flight units of the Iran Army Navy and IRGC Navy, Russian floating units consisting of the Stoiky destroyer, a KoLa logistics ship, and a helicopter are present at the exercise," he added.

The spokesperson highlighted that the purpose of holding the exercise is to strengthen security and its foundations in the region and to expand mutual cooperation between the two countries.

"A variety of tactical exercises such as rescuing a floating vessel from fire, releasing an attacked vessel, shooting at specific targets, shooting at air targets at night, and other tactical and operational exercises are foreseen in this exercise," Rear Admiral Tahani said.

"The strengthening of the security of international maritime trade, combating piracy and maritime terrorism, exchanging information in the field of maritime rescue, as well as exchanging operational and tactical experiences are the objectives of the exercise," he noted.

Earlier, the Deputy Coordinator of the Islamic Republic of Iran's Army said that the joint naval drill with Russia demonstrates the naval authority of Iran's Armed Forces.

In late December 2019, Iran, Russia, and China held joint naval drills in the Indian Ocean and the Gulf of Oman. The maneuvers lasted four days.