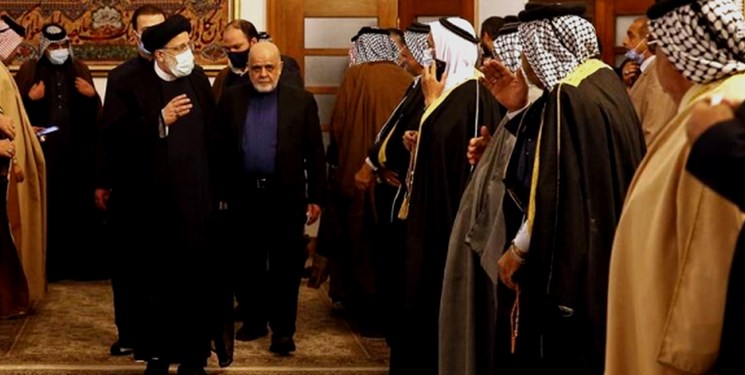 "The Islamic Republic of Iran will remain strong and independent alongside Iraq and, as Supreme Leader of the Islamic Revolution Ayatollah Seyed Ali Khamenei has stressed, Iran will support the sovereignty of Iraq and the prosperity and progress of that country," Rayeesi said in a message to the Iraqi people after wrapping us his official visit to the neighboring country.

He, meantime, thanked the Iraqi people and officials for hosting him during his visit to Iraq.

"The two nations of Iran and Iraq will take revenge on those who assassinated Lt. Gen. Soleimani and Abu Mahdi al-Muhandis. They will not allow the American occupiers to stay in the region," he added.

Pursuing the case of assassination of Iran's anti-terror Commander Lieutenant General Qassem Soleimani who was martyred in Iraq by the US was among most important goals of Rayeesi's trip.

In a meeting with President Salih in Baghdad on Wednesday, Rayeesi said that his country wants its neighbor Iraq to grow strong and independent.

During the meeting, Rayeesi referred to the historical and cultural commonalities between the two nations of Iran and Iraq, saying that the growing bilateral relations have roots in shared religious beliefs and the two nations’ civilizations.

He further said that neighboring Iran has always wanted Iraq to be a strong, prosperous and independent country as Iran's Leader has always stressed, telling the Iraqi side that reliance on the US has not brought happiness to any nations.

Rayeesi also hailed the decision by the two nations to cancel visas for their citizens, saying that the visa cancellation will have a great effect in facilitating pilgrimage visits.

The Iranian Judiciary chief further said that before his started his visit to Iraq, he had asked the Leader of the Islamic Revolution to agree to the amnesty of Iraqi prisoners imprisoned in Iran and he had agreed with his request, adding that he had prepared a list and these prisoners were pardoned.

He further stressed that the Iraqi side was expected to pardon Iranian prisoners detained in the country, whose list will be submitted to the Iraqi government.

Rayeesi referred to the judicial issues of families formed as a result of a marriage between an Iranian to an Iraqi national, and said, "These people, who are mostly Iranian wives, faced problems after the fall of Saddam and the return of Iraqi citizens and the liberation of their families."

"A working group has been set up to resolve their problems, and we hope that this issue will be resolved quickly with the help of the Iraqi authorities," he added.

The establishment of commercial courts between the Iranian and Iraqi judicial apparatuses to deal specifically with commercial disputes and to facilitate investment and extradition of criminals was another issue touched upon by Rayeesi in his remarks.

"Criminals in either country should not feel safe, and judicial cooperation between the two countries can have positive results, including preventing the recurrence of crime," he said.

In the end, the Iranian Judiciary chief conveyed the Leader of the Islamic Revolution’s greetings to the Iraqi people and authorities, and stressed the need to accelerate the legal prosecution of the perpetrators behind the assassination of martyred General Qassem Soleimani and Abu Mahdi al-Mohandis.