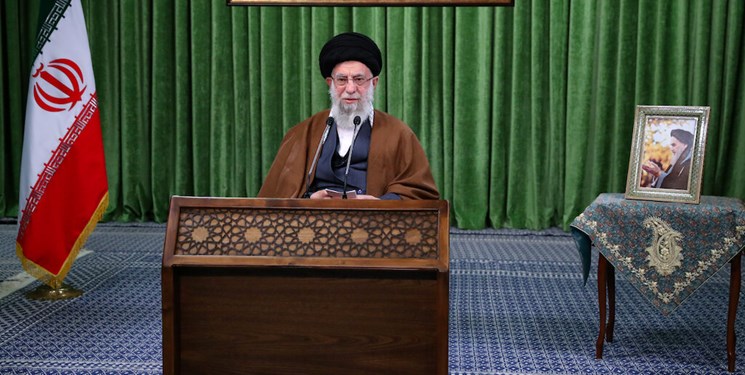 TEHRAN (FNA)- Supreme Leader of the Islamic Revolution Ayatollah Seyed Ali Khamenei underlined on Wednesday that Iran will no more pin hope on promises made by the western states on implementation of the nuclear deal, adding that practical measures are needed to persuade Tehran to remain committed to the agreement.

“We have said a lot about the nuclear deal and the policies of the Islamic Republic. Words are uttered and promises are made. Today I want to say just one word; we have heard many good words and promises that were later violated. Words and promises are useless. This time just action; if we see action from the other side, we will act too. With words and promises, the Islamic Republic will not be satisfied this time like in the past,” Ayatollah Khamenei said, addressing a meeting with Iranian people from East Azerbaijan Province via video conference on the occasion of the uprising of the people of Tabriz on Feb. 18, 1978, against the former Pahlavi regime.

Elsewhere, he lauded efforts of people of Tabriz which led to the victory of the Islamic Revolution in Iran, and said, "The Revolution was able to turn Iran, which was a scientifically backward country, economically dependent on the great powers and politically follower of certain countries, into an independent, beloved and highly successful country."

"Strengthening the country's military and defense forces was one of the achievements of the revolution," Ayatollah Khamenei said, adding, "Today, the military status of Iran is tens of times better than it was in the days before the Revolution, and we are a great regional power."

"The reason behind US and Israel conspiracies is that they see that the Revolution has not stopped and is moving forward," he noted.

"The enemy launches negative propaganda about our failures but it does not show our progress and hides it," Ayatollah Khamenei said.

In relevant remarks on February 7, Ayatollah Khamenei said that his country will not take steps to return to its nuclear deal undertakings unless it will be able to verify the US practical measures in removing the sanctions against Tehran.

Iranian Foreign Ministry Spokesman Saeed Khatibzadeh said on Monday that his country will halt the voluntary implementation of the Additional Protocol to the Non-Proliferation Treaty (NPT) next week in case other parties continue to defy their nuclear deal undertakings.