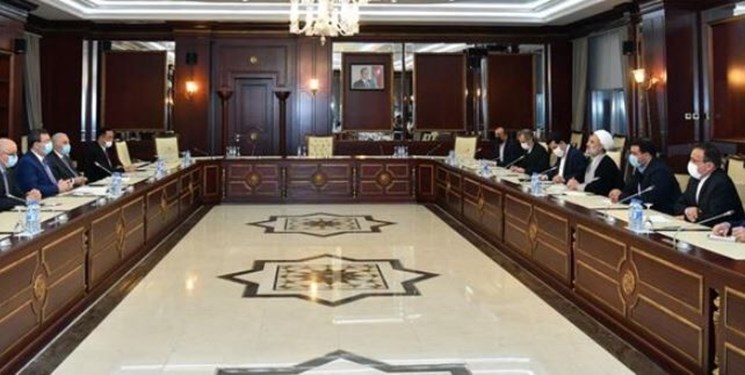 TEHRAN (FNA)- Chairman of the Iranian Parliament’s National Security and Foreign Policy Commission Mojtaba Zonnouri and Head of Defense, Security and Anti-Corruption Committee of the National Assembly of Azerbaijan Ziafat Askarov stressed the importance of inter-parliamentary relations between Tehran and Baku.

"There are suitable conditions and many capacities for the development of relations between the two countries and the parliaments of the two countries," Zonnouri said during the meeting in Baku on Wednesday.

Zonnour, meantime, congratulated the liberation of the territories of the Republic of Azerbaijan.

He also said that the Iranian companies are interested in participating in the reconstruction of the liberated territories of the Republic of Azerbaijan.

"The documents signed during the reciprocal visits of the two presidents as an important factor for the development of bilateral relations," Askarov said while referring to the determination of the leaders of Azerbaijan and Iran to develop bilateral relations in various fields,

He also lauded the inter-parliamentary relations between the Republic of Azerbaijan and Iran and the importance of mutual visits of the parliamentary delegations of the two countries.

Askarov deemed the implementation of joint economic projects between Baku and Tehran to be in the interest of both countries.

In relevant remarks in mid-January, Iranian President's Chief of Staff Mahmoud Vaezi and Azerbaijan's Deputy Prime Minister Shahin Mustafayev in a meeting in Tehran underlined the need to develop and enhance mutual cooperation in different fields.

During the meeting in the Iranian capital on Monday, Vaezi and Mustafayev explored avenues for bolstering and reinvigorating bilateral ties in all areas, specially trade and economy.

The two sides called for accelerating the implementation of the previous agreements.

The meeting was held on the sidelines of organizing the 14th Iran-Azerbaijan Joint Economic Commission.