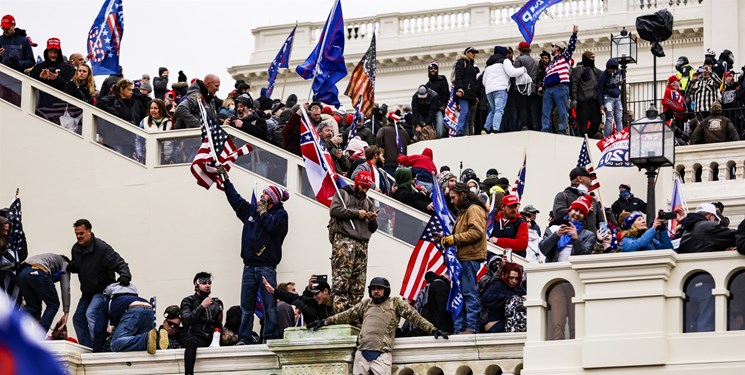 TEHRAN (FNA)- The FBI is reportedly investigating members of Congress as "suspects" in a probe of the January 6 insurrection and has swept up lawmakers' phone data, according to a report.

The Intercept reported Monday that within hours of the Capitol break-in the FBI began securing thousands of phone and electronic records connected to people at the scene.

Through special emergency powers, the FBI collected reams of private cell phone communications, some of which were from lawmakers and their staff.

Investigators are "searching cell towers and phones pinging off cell sites in the area to determine visitors to the Capitol", a retired senior FBI official told the news site.

The Intercept added investigators have relied on data "dumps" from cell phone towers in the D.C. area to map out who was there.

From there, they are able to trace call records - but not the content of the conversations - from phones.

"The data is also being used to map links between suspects, which include members of Congress," The Intercept reported.

A number of Democrats suggested after the MAGA riot that some of their Republican colleagues may have been involved.

GOP lawmakers have denied these allegations.

A 2007 corruption case against former Rep. William Jefferson, a Louisiana Democrat, reinforced protections against the executive branch sweeping up records from Congress.

In a statement released on January 11, Sen. Sheldon Whitehouse warned the Justice Department against investigating members of Congress' role in the attack, saying that the Senate should do so instead.

"Separation of powers principles generally, and the speech and debate clause particularly, restrict the executive branch’s ability to investigate members of Congress. That's why the Constitution puts the houses of Congress in charge of disciplining their members," Whitehouse elaborated to The Intercept.

"In the case of the January 6 insurrection, I’ve asked the Senate ethics panel to take a hard look at certain members’ behavior, including whether they coordinated or conspired with, aided and abetted, or gave aid and comfort to the insurrectionists," the Rhode Island Democrat continued.

In the original statement, Whitehouse suggested that the Senate Judiciary and perhaps Homeland Security Committees probe colleagues' role in the insurrection.

Whitehouse also stated that Republican Sens. Josh Hawley, Ted Cruz and Ron Johnson need to be removed from the committees investigating the insurrection.

Hawley and Cruz were among the GOP senators to back a House GOP effort to challenge Electoral College vote counts in certain states during the January 6 joint session to certify that President Joe Biden won the 2020 presidential election.

A US senator has to sign on to a House challenge in order for it to be debated.

Their actions gave what Democrats call "the big lie" - that President Donald Trump was cheated out of a second term due to widespread voter fraud - more weight.

Since the insurrection, Johnson has downplayed the assault.

The FBI refused to comment to the Intercept on specific tools investigators were using in the probe of the January 6 insurrection, except to say the bureau received more than 200,000 tips.

"As with all our operations, the FBI conducts itself according to our legal requirements and established policies," the FBI told The Intercept.