Some 60 People Detained During Anti-Government Protests in Yerevan 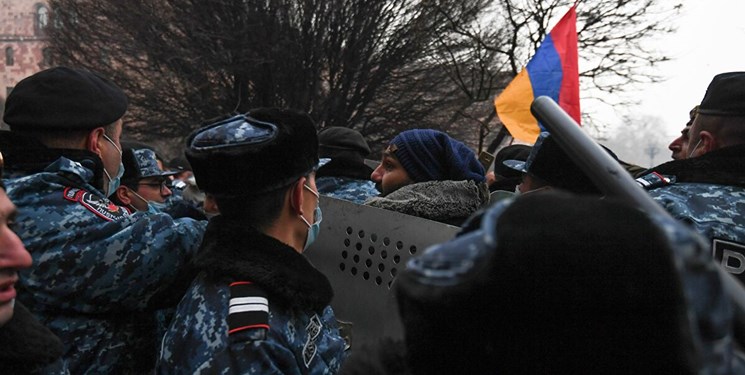 TEHRAN (FNA)- About 60 people have been taken to police custody in Yerevan during opposition protests demanding the resignation of Armenian Prime Minister Nikol Pashinyan, a representative of the national police stated.

"A total of 57 people have been taken to police stations," the representative told Sputnik on Tuesday.

Protesters gathered earlier in the day outside the government building near Republic Square — the main square of Yerevan — in an attempt to keep Pashinyan from going inside. However, all entrances to the building were cordoned off by law enforcement officers.

Anti-government protests have been ongoing in Armenia since November 2020, when Pashinyan agreed to a ceasefire that many Armenians interpreted as a defeat in the Nagorno-Karabakh conflict.

Dozens of opposition parties have united behind calls for Pashinyan to step down, nominating former Prime Minister Vazgen Manukyan to head the government.

In December, Pashinyan invited political forces for consultations on the early parliamentary elections planned for 2021, but the opposition wants the prime minister to resign before the elections.