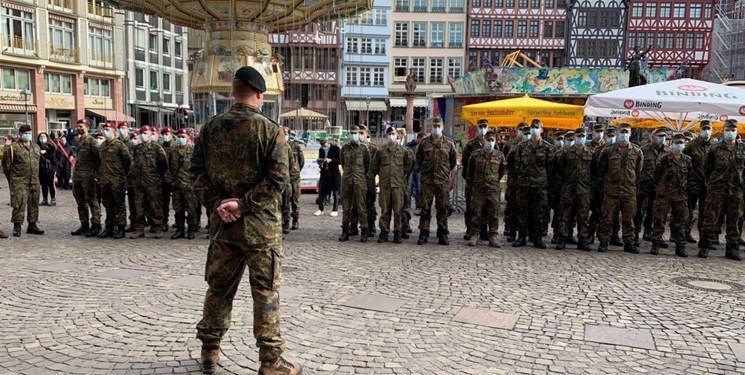 TEHRAN (FNA)- The number of far-right extremists in the German Armed Forces has grown by almost a third, while the number of military personnel rejecting the post-WWII German state has almost doubled, a commissioner told Germany's parliament.

The number of so-called Reichsbuerger – members of several far-right movements rejecting the legitimacy of the modern German state altogether – in the army has doubled over the same period since the discovery of 31 such cases in 2020, up from 16 in 2019. The number of identified Islamists has, on the contrary, fallen from 77 in 2019 to 31 in 2020.

The increase demonstrates a pressing need for “education, sanctions and prevention” in the German army, Hoegl said, noting that political education should become “an integral part of the everyday work” for the country’s military.

She also announced that the fight against the far-right extremism is an “ongoing task” for not just the army but German society as a whole.

The commissioner praised the work of the counterintelligence service for its work identifying extremist elements in the military, saying that the service “fulfills an important function in the defense against extremism and should be further strengthened in terms of personnel”.

Yet, it appears that the MAD is about to face some difficulties in its future work precisely because of the lack of personnel. Another part of Hoegl’s report was dedicated to the long-term personnel shortages that the 183,000-member army has been experiencing for years.

More than 20,000 senior military posts were vacant at the end of 2020, according to Hoegl. She also added that some military branches were lacking a third or even half of the required personnel for years, leading to the existing forces being overstretched, as reported by Der Spiegel.

Personnel shortages in the Air Force, medical services and cybersecurity divisions were among the most alarming, according to the report. Military counterintelligence was affected by this issue as well, Hoegl said, given that it faced “acute problems” recruiting younger talent. The commissioner also added that the army has to compete to bring in “extremism experts” with other German security services like the BfV – the domestic intelligence agency tasked with countering terrorist activities.

The German Armed Forces, or Bundeswehr, have been struggling to fight internal far-right extremist activity in its ranks for quite some time. Indeed, the Bundeswehr has been rocked by a number of high-profile scandals involving Nazi sympathizers and various extremists.

Back in 2017, numerous items of Nazi-era Wehrmacht memorabilia – including posters glorifying Nazi soldiers – were discovered inside several German Army barracks. The discomforting discovery prompted a large-scale probe at that time.

Later, the German elite special forces KSK unit became embroiled in a series of scandals, including a controversial farewell party involving Nazi hand gestures. Some KSK members were also found to be involved in a far-right underground network plot to kill a number of high-profile German politicians, including Foreign Minister Heiko Maas, after the supposed “fall of public order” in Germany.

The scandal has reached such proportions that Defense Minister Annegret Kramp-Karrenbauer opted to partially disband the unit rather than attempt to reform its problematic members.