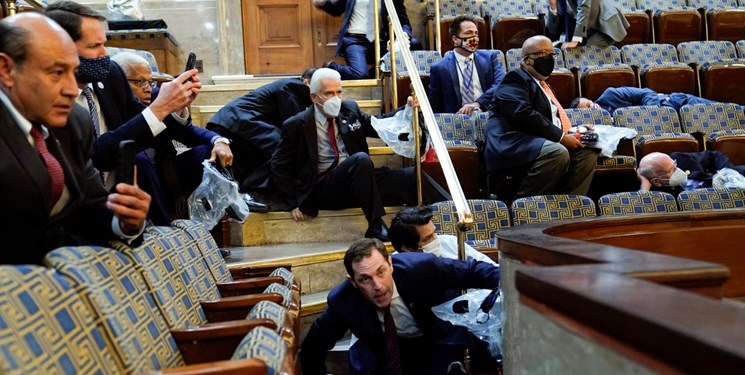 TEHRAN (FNA)- Federal authorities arrested two New Yorkers — a former New York City police officer and a Republican Party official from Queens — on charges related to their alleged roles in the deadly January 6 riot at the US Capitol.

Ex-New York Police Department officer Thomas Webster, who is a former Marine, is accused of attacking a Capitol Police officer with an aluminum pole while holding a Marine Corps flag, NBC News reported on Tuesday.

A prosecutor said Tuesday that Webster, a married father of three, looked enraged on the video, which shows that he “goes after that cop like a junkyard dog --- teeth clenched and fists clenched”, according to NBC.

“These videos shock the conscience,” the prosecutor stated at a bail hearing in federal court in White Plains, New York, adding, “We believe he had a gun at the Capitol and thank God he didn’t fire a shot then.”

A judge ordered Webster detained without bail because of his potential danger to the public.

Webster who as a cop had duties that included guarding the perimeter of City Hall and Gracie Mansion, the official residence of New York’s mayors, surrendered Monday at the FBI’s Hudson Valley office, according to NBC.

Webster’s lawyer said he was at the Capitol to protest the election of Joe Bide at the behest of then-President Donald Trump, according to NBC.

Webster was seen on a “seeking information” poster that was tweeted by the FBI in late January.

The other defendant, Philip Grillo, 46, was arrested Monday afternoon at the residence of his girlfriend in Queens, New York. Grillo calls himself “The Republican Messiah” on his Facebook page.

Grillo was identified by two tipsters as one of the mob that invaded the Capitol; they recognized him by a Knights of Columbus jacket he was wearing, among other things, according to a statement of facts signed by an FBI agent.

“I saw him twice in CNN in two separate incidents,” one witness told the FBI, noting that they knew Grillo from growing up with him in the Glen Oaks section of Queens.

Grillo, whom the FBI confirmed was a member of a Queens Knights of Columbus council, is listed as being the GOP leader of the 24th Assembly District in Queens by that county’s Republican Party group.

In late 2020, he was blocked from being confirmed as a place-holder candidate in a special February 2 election for a seat on the New York City Council.

Grillo’s effort to get on the ballot and swap in another man as the actual candidate in the races — a tactic that is legal — failed after a Democratic former council member who sought that seat challenged the petition signatures he submitted.

His Facebook page notes that he is a state GOP committeeman in “President Trumps Hometown District”.

The FBI announced in the statement of facts that a cell phone number registered to the name of Grillo’s mother, who is in her early 70s, was used in and around the Capitol building on the day of the riot. She has not been charged in the case.

Grillo is expected to appear in US District Court in Brooklyn later Tuesday.

The statement of facts says he was among thousands of rioters who swarmed in and around the Capitol on January 6 after a rally by Trump, who asked his supporters to help him fight against the confirmation of Joe Biden as the winner of the presidential election. A joint session of Congress was meeting that day to confirm Biden’s victory.

The statement of facts says video footage from inside the Capitol shows Grillo climbing through a broken window at about 2:30 pm that day and then is seen holding a megaphone.

Other surveillance video shows Grillo in the Rotunda, and among rioters trying to enter a room that contained doors leading outside, “where more protestors were gathered”.

Those doors were ultimately opened by other members of the crowd, who pushed against Capitol Police officers who tried to keep the doors closed, the document says.

In YouTube footage taken just outside the Capitol, Grillo was seen among a crowd that was shouting “Fight for Trump”.

“This crowd was engaged in a physical confrontation with uniformed officers at the entryway,” the document read, adding, “Grillo was near the front of the crowd. The crowd, including Grillo, was eventually driven back from the door when officers employed a chemical irritant.”

The document notes that on November 11, Grillo posted a brief video from the Facebook page of “Donald J. Trump” on his own page.

“Trump’s post was captioned with “WE WILL WIN!” and a brief video saying to believe in the impossible,” according to the document.