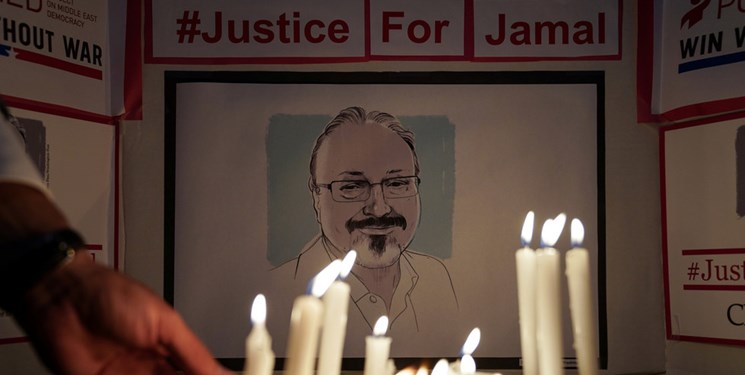 TEHRAN (FNA)- The two private jets used by a Saudi Arabian assassination squad that killed and allegedly dismembered journalist Jamal Khashoggi were owned by a company that less than a year prior had been seized by the Kingdom's powerful Crown Prince, Mohammad bin Salman (MbS), according to recently filed court documents seen by CNN.

The documents, filed as part of a Canadian civil lawsuit earlier this year, are labeled "Top Secret" and signed by a Saudi minister who relayed the orders of the crown prince, the young de facto ruler of Saudi Arabia.

"According to the instruction of His Highness the Crown Prince," the minister wrote according to a translation, "immediately approve the completion of the necessary procedures for this".

The filing lays out how ownership of Sky Prime Aviation was ordered to be transferred into the country's $400 billion sovereign wealth fund in late 2017. The company's planes were later used in the October 2018 killing of Khashoggi.

The Kingdom's sovereign wealth fund, known as the Public Investment Fund, is controlled by the Saudi crown and is chaired by the crown prince, who is known as MbS. The documents establishing the link between the planes and the prince were filed by a group of Saudi-state owned companies as part of an embezzlement suit they opened last month in Canada against a former top Saudi intelligence official, Saad Al-Jabri.

The embezzlement accusations against Al-Jabri came after a lawsuit he filed last year in Washington, DC, District Court against MbS. Al-Jabri has accused the crown prince of sending a hit team to kill him in Canada just days after Khashoggi was murdered. MbS was served a summons via WhatsApp, and in December, a lawyer for the prince asked the court to dismiss the case.

Evidence that ownership of the fleet of private planes had been moved into Saudi Arabia's Public Investment Fund has not been previously reported and provides another link between Khashoggi's death and MbS. In October 2018, not long after Khashoggi's murder, The Wall Street Journal, citing people familiar with the matter, reported that the Gulfstream jets used by the killers belonged to a company controlled by MbS.

"He would have been tracking [the company] and would've been aware of how it was used," Dan Hoffman, the former director of the CIA's Middle East Division, said of the powerful crown prince, adding, "And it's just more potential evidence that he was in the know on this. Which has always been the contention. This is just more evidence of that."

As soon as Thursday, the US intelligence community is set to release a long-awaited report with new public details about those behind the death of Khashoggi. Not long after the Saudi journalist was killed at the Saudi consulate in Istanbul, the CIA assessed with high confidence that MbS had personally ordered the killing, but intelligence officials never spoke publicly or presented evidence. A United Nations investigator found in June 2019 it was "inconceivable" that MbS wasn't aware of the operation.

Saudi officials in Washington and Riyadh did not immediately respond to the new revelations. MbS has denied that he ordered Khashoggi's murder but stated that he bears responsibility. Eight suspects were given prison sentences in what the UN investigator called a "parody of justice".

Faisal Gill, a lawyer for Khashoggi's former fiancée and a nonprofit organization that have filed a federal lawsuit against MbS and two dozen co-defendants, noted his client was "pleasantly surprised" that evidence of bin Salman's control over Sky Prime Aviation has come to light.

"Any evidence that basically ties MbS and others, especially in a direct line way, which we believe this does, is extremely important," Gill continued.

Sky Prime Aviation operates the two Gulfstream corporate jets that flew to and from Istanbul with most of the 15-man hit team, according to public aviation data and a United Nations report on Khashoggi's death.

According to the UN report, after Khashoggi was killed inside the Saudi consulate in Istanbul on October 2, the murderers quickly made their escape and headed for the planes. One jet, with the tail number HZ-SK1, had just landed that evening. An hour and fifteen minutes after landing it was back in the air with six members of the Saudi team. Four and a half hours later, the second plane, tail number HZ-SK2, took off from Ataturk Airport with seven more men onboard, according to the UN report.

The first jet flew through Cairo, the second through Dubai on their way back to Riyadh. The last two members of the hit team flew commercial from Istanbul to Riyadh.

According to an amended complaint filed this month by Al-Jabri against MbS in Washington DC, Al-Muzaini was kidnapped in Dubai in September 2017 and forcibly rendered back to Saudi Arabia.

For several months, Al-Jabri says Al-Muzaini was tortured and abused, according to the complaint, including by a top MbS aide implicated in the murder of Khashoggi. Eventually Al-Muzaini was moved to Riyadh's Ritz-Carlton, where MbS detained around 200 Saudi royals, officials and business executives in the name of an anti-corruption campaign. The state claims it eventually seized around $100 billion in settlements.

The documents ordering the transfer of Sky Prime Aviation in December 2017 include the Saudi Kingdom's palm tree seal with crossed swords and the words "TOP SECRET NOT FOR CIRCULATION AND VERY URGENT", according to the translation provided to the court. Another document showing the transfer of shares is signed by Al-Muzaini, whose current whereabouts are unknown.

The letters ordering the transfer are signed by Mohammed Al-Al-Sheikh, a fellow board member of the fund who sits on the Council of Ministers, according to the fund's website. Two other senior fund officials were recipients of the notes, one of which is handwritten and includes instructions "to do what's necessary as fast as possible to transfer ownerships of the companies".

Sky Prime Aviation, three of its Sky affiliates and 16 other companies were ordered transferred to the fund's control by Al-Sheikh.

It was so important to the crown prince that the fund take over the companies, Al-Sheikh wrote, that "His Highness is to be kept abreast of what's being done".