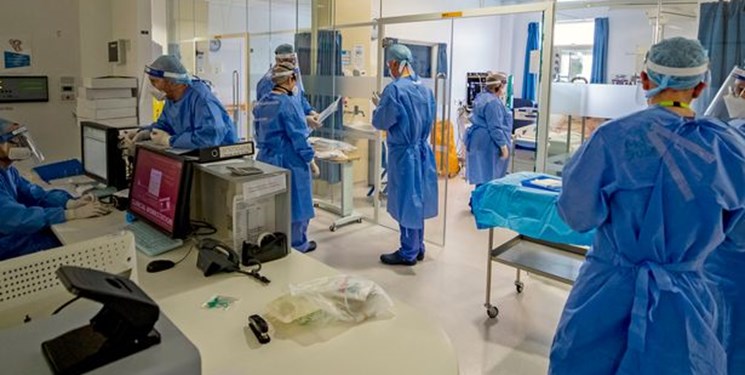 TEHRAN (FNA)- London's hospitals have been told to prepare for another surge in coronavirus patients later this year, it was claimed on Wednesday.

Leaked guidance handed to NHS trusts in the capital last month revealed they would be asked to "begin to plan for a possible wave three COVID surge", according to the Health Service Journal, The Daily Mail reported.

The presentation, from NHS England and NHS Improvement, added, "The purpose of the critical care de-surge plan (is to) ensure that the... bed base can expand safely in the event of a third COVID surge and/or other major incident/event."

NHS sources in the capital said the move was based on gloomy Sage predictions that there could be a third wave of hospitalisations in the autumn, even though all Britons are expected to have received their first dose by June. The HSJ claimed no other regions in England have been given similar instructions.

Experts believe the disease is seasonal, like the flu. But it is not impossible for COVID cases to spiral in the summer, after South Africa — which has its hottest months while the UK is in winter — recorded an explosion of infections between November and mid-January thanks to the spread of a highly-transmissible variant.

But ministers hope the mammoth vaccine roll-out will stop another surge in hospitalisations. There are concerns that a variant might partially dodge jab-induced immunity but No10's top scientific advisers insist jabs should still prevent millions from becoming severely ill.

It comes after official data revealed outbreaks of coronavirus have been fading rapidly in London. Infections have nosedived in every borough over the fortnight to February 25, the most recent day figures are available for.

The capital had 10 local authorities registering fewer than 50 cases per 100,000 people, putting them among the least infected areas of England. They were: Lewisham, Westminster, Southwark, Camden, Kensington and Chelsea, Islington, Kingston upon Thames, Bromley, Enfield and Lambeth.

Prime Minister Boris Johnson has set out his roadmap to get the country out of lockdown, with the first stage seeing schools reopen to all pupils on March 8. The Prime Minister has said the earliest all restrictions will go is June 21, and has not ruled out pushing back his timetable should hospitalisations rise again.

The leaked presentation handed to the capital's integrated care systems — which includes hospitals, local councils and voluntary organisations supporting the health service — said they should make plans for a possible third wave.

It added trusts also needed to set out "goals" for giving doctors and nurses "immediate rest and respite", cutting critical care capacity after it was ramped up amid spiralling admissions over January, and for cutting back the record waiting list for routine operations.

Thousands of standard procedures including for hip replacements and cataract surgery have been disrupted during the second wave, with the number of people waiting more than a year jumping to levels not seen since April 2008.

Department of Health data, however, shows COVID pressure on hospitals in the capital is still easing.

The number of patients suffering from the virus on NHS wards in London plunged 44 percent over the two weeks to February 26, falling from 3,939 to 2,223 patients, on average.

This is more than 70 percent below the peak in the darkest days of January when there were 7,750 patients with the virus.

And in another promising sign, the infection rate in London has tumbled to be third lowest out of England's nine regions at 65.4 cases per 100,000.

The capital also accounted for 10 of the 16 upper tier local authorities in England recording fewer than 50 cases per 100,000 people.

The six councils registering this rate that were not in London were Cornwall, Devon, the Isle of Wight, East Sussex, Bath and North Somerset and Gloucestershire.

Only two local authorities in the capital still had an infection rate above 100 cases per 100,000 in the week to February 25, but both had seen cases slide over the last two weeks.

It comes after it was revealed that a "crude" and controversial algorithm is being used to divvy up COVID jab supplies across the UK.

Department of Health bosses on Wednesday confirmed officials deployed the Barnett formula to decide how many doses should be allocated to the devolved nations.

The method — used in the Treasury since the 1980s to distribute public funding — is widely recognised as being flawed because it looks almost solely at population size.

The Taxpayers' Alliance pressure group previously described the formula as a "crude, back-of-the-envelope rul"' because it doesn't consider different needs in different areas.

It also doesn't account for a range of other factors, such as the number of elderly people, rates of poverty and ill health — all of which make people vulnerable to COVID and bump them up the vaccine priority list.

The decision to use the strategy means England is receiving 84.1 percent of vaccine shipments from Pfizer and AstraZeneca, Scotland 8.3 percent, Wales 4.8 percent and Northern Ireland 2.9 percent.

A source told MailOnline that the devolved nations agreed that, despite its flaws, the Barnett formula was "the most efficient method of vaccine allocation across the UK", given the urgency of the pandemic.

Public health experts said the UK's jab allocation strategy "should have been stratified" so areas with larger elderly populations, like Wales, got more doses quicker.

But Professor Gabriel Scally, former director of public health for the South West of England, told MailOnline the success of the roll-out had "probably nullified" any flaws in the Government's approach.