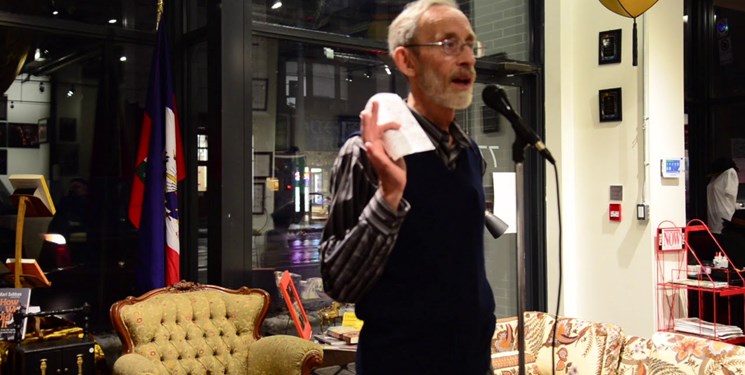 TEHRAN (FNA)- Eric Walberg, author and journalist, says it is Saudi Arabia which makes some Arab countries normalize their relations with Israel on its behalf.

Speaking in an interview with FNA, Eric Walberg said, “Saudi Arabia under Bin Salman is not so interested in Palestine, but instead is moving to solidify Israel's role as the chief actor in the Middle East, with Saudi Arabia a willing client.”

“Trump is using the opportunity to promote himself as a peacemaker… Trump was desperate for some positive publicity in the heat of the election race. He is a bully even as a negotiator, and used the opportunity for his own ends”, he added.

Eric Walberg is a well-known Canadian author and journalist specializing in the West Asian, Central Asia and Russian affairs since 1980. He is also a regular contributor to various mainstream and alternative media, including Counterpunch, Dissident Voice, Global Research, Al Jazeerah, Press TV and Turkish Weekly.

Q: Neither Bahrain, nor Serbia and not even the UAE share borders with Israel; nor did they have trade relations since the occupation regime came into existence. Why do they need to establish ties with Israel?

A: In the late 1800s, Bahrain became a protectorate of the United Kingdom. In 1971, it declared independence. Formerly an emirate, Bahrain was declared an Islamic constitutional monarchy in 2002. Though 70% of the people are Shia, it is ruled by a Sunni dynasty, which is fearful of its weak hold on power. It is under the domination of Saudi Arabia now, and clearly recognized Israel on behalf of Saudi Arabia. But it is not of great importance compared to the UAE and Saudi Arabia.

The UAE is a federation of seven emirates. Its most populous city Dubai (2.5m) is an important global city and international aviation and maritime trade hub. The country is much less reliant on oil and gas than in previous years and is economically focusing on tourism and business. It needs open air traffic to prosper and is also tied to Saudi Arabia, so easy access to Europe through Israel is of great advantage. Saudi Arabia under Bin Salman is not so interested in Palestine, but instead is moving to solidify Israel's role as the chief actor in the Middle East, with Saudi Arabia a willing client.

Serbia has recognized Israel from 1948 but was not an active partner in Yugoslav days. With the NATO-US bombing of Serbia in 1990 and the creation of Kosovo, Serbia is weak and has buckled to pressure from Trump, who is eager to put his stamp on the Middle East.

Now Trump's peace agreement has brought Serbia and Kosovo into negotiations. Kosovo is to be allowed an embassy in Israel, and trade advantages. Serbia promises to open a Chamber of Commerce office as well as Serbia’s “official state office” in Jerusalem “very soon”. But this not a done deal.

Israel refused to recognize Kosovo because it did not want to support a unilateral declaration of statehood, which Jerusalem feared could create a dangerous precedent for the Palestinians. Trump's deal is for Serbia to accept Kosovo's embassy in Jerusalem, even though Serbia still does not recognize Kosovo as an independent country. Serbia has threatened to back out of the deal if it violates Serbia's refusal to budge on Kosovo independence, but it is weak. As Trump, the deal maker, and Netanyahu scheme for their own interests, Serbia is left out in the cold.

This is a clever, tricky game that Israel plays with both sides, Serbia and Kosovo. Tails you lose, heads I win. Can US-Israel pull it off? Russia was on the US side in 1999 under Yelstin, and allowed the NATO bombing of Serbia. Russia is on Serbia's side now, so the deal may still unravel.

Trump is using the opportunity to promote himself as a peacemaker. He also wants to show that he can succeed where Biden previously not only failed, but acted as a warmonger, having been a leading advocate of the NATO bombing of Yugoslavia and Serbia in 1999. Things do not look good for Serbia. It is a complicated game of chess, the latest in the ongoing 'great game' today.

Q: Why do you think Donald Trump administration was always the first person to announce the normalization deals? Why are not the deals announced by the countries (Bahrain, Serbia or UAE) themselves?

A: Trump was desperate for some positive publicity in the heat of the election race. He is a bully even as a negotiator, and used the opportunity for his own ends. His poll numbers were down after the expose of his mismanagement of the Covid-19 crisis and his insults to troops, calling those who died losers. The little, weak countries recognizing Israel were hiding behind Trump's skirts.

Q: Washington claims establishing ties between Arab countries and Israel helps the peace process in the West Asian region. Do you buy it?

A: This is a sad moment for Palestine. Egypt and Jordan are now joined by these emirates in collaborating with Israel. El-Sisi lauded the agreements. Syria is in shambles and Lebanon bankrupt. The Arab League did not criticize the developments. The peace Israel offers is the peace of the dead. The Palestinians have only Iran as a solid ally.