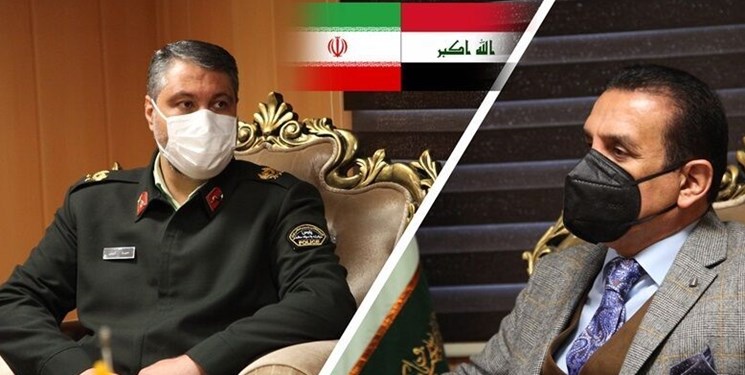 Iran's anti-narcotics police have made significant progress in various fields, particularly the training of drug-sniffing dogs and a specialized drug lab, and expresses its full readiness to cooperate jointly with the Iraqi Anti-Narcotics Police and share experiences, Brigadier-General Karimi said in a meeting with Director of Iraq's Anti-Narcotics Department Major General Mazen Kamel Mansour.

He pointed out that undoubtedly, the presence of transregional states is spreading the ominous phenomenon of drug trafficking in the Middle East

"The studies have shown that the majority of terrorist groups' financial resources come from drug trafficking," Brigadier General Karimi added.

In a relevant development earlier this week, Commander of the Border Guards of the Islamic Republic of Iran Police Brigadier-General Ahmad Ali Goudarzi and his Iraqi counterpart General Hamid Abdullah Ibrahim stressed the need to expand border cooperation between the two neighbors.

Goudarzi and Ibrahim discussed the ways to strengthen and deepen border cooperation in a bid to boost border security and remove problems originated in border areas.

"The Islamic Republic of Iran has 15 neighboring countries and has the most common borders with its neighbors in the world after Russia and China, which are controlled and managed in the spirit of friendship between the regional countries," the Iranian official said.

"We hope that in this meeting we will transfer experiences to improve the border situation," he added.

Goudarzi noted, "Since the beginning of the Iranian year [March 20, 2020], about 130 tons of various drugs have been seized on the borders of the Islamic Republic of Iran."

"Iran has a 1609-kilometer border with Iraq, and this vast common border is well controlled and managed by the favorable relations and interaction between the border guards of the two countries," he said, stressing that Iran will strongly fight against the elements affiliated to the Global Arrogance, and also Takfiri and terrorist mercenaries on the borders.

"We expect Iraq to cover the border gaps and actively combat the smuggling of weapons, ammunition and anti-cultural items," Goudarzi stated.

Hamid Abdullah Ibrahim, for his part, stressed the need to transfer experiences and information between the two countries' border guards, saying, "Equipping and blocking Iraq's borders is on the agenda so that we can use these components and transfer experiences to fight terrorism, insurgent groups, smuggling weapons and ammunition, and anti-cultural items."