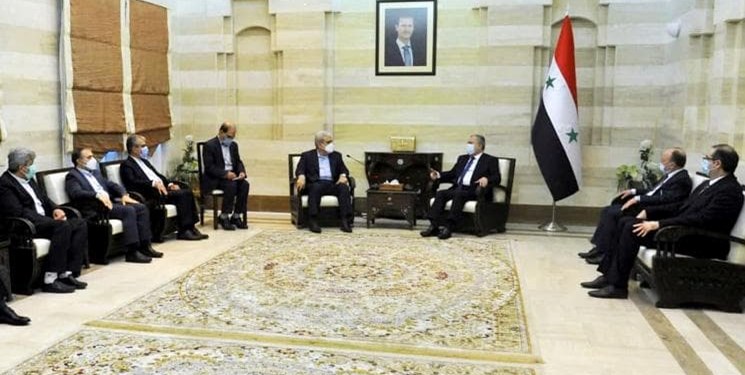 During the meeting, Arnous hailed scientific progress of the Islamic Republic of Iran despite economic sanctions, and expressed hope that scientific cooperation between Tehran and Damascus would be established.

He expressed the hope that this trip will lead to scientific and technological cooperation between the two sides.

He went on to say, “We intend to develop our country's academic and technological infrastructures and set up laboratory and research centers with the cooperation of Iran.”

Elsewhere in his remarks, Arnous announced Syria’s gratitude to the leadership of Iran, as well as the Iranian people and government for standing by the Syrian nation during the hard war against terrorists.

Despite economic sanctions, the Islamic Republic of Iran continued its scientific progress and forced the United States to change its position, he said, and added, "Powerful countries usually turn the threat of economic sanctions into an opportunity for flourishment and this is exactly what happened in Iran."

The exchange of scientific and technological experiences between two countries in various fields was one of the main topics.

Sattari, for his part, said that more than 10,000 startups exist in Iran presenting their innovative and creative technological products to the society, expressing Iran’s readiness to establish joint science parks with other counties so as to improve bilateral cooperation.

During his visit to Damascus this week, Sattari had also said his country was prepared to meet Syria’s need to medical equipment and technologies.

“Iran is ready to export medical equipment and technology needed by Syria,” Sattari said in a meeting on Tuesday with Syrian Minister of Health Hassan Ghabbash, noting that knowledge-based companies have notably improved Iran’s health sector.

“Iran has managed to export some equipment such as standard ventilators to Syria amid the coronavirus pandemic,” he said, noting that Factor VII (a vitamin K–dependent serine protease glycoprotein) have also been exported to Syria since two weeks ago.

Hassan Ghabbash, for his part, called on Iran to provide short-term courses for some Syrian physicians, and added that the import of medicines from Iran is very important, because the besieged country attaches importance to standard of drugs such as Iranian medicines.

In a separate meeting with the Syrian Industry Minister Ziyad Sabbagh, Sattari underlined further expansion of technological cooperation between Tehran and Damascus.

In relevant remarks earlier on Tuesday, Sattari said that startups are powerful components of Iran’s defense against global sanctions, adding that technology diplomacy is a new form of diplomacy that Iran tries to build up in the world.

“Startups are the elements of Iran’s powerful defense against international sanctions,” Sattari said at the Iran-Syria Business Matchmaking event in Damascus on Tuesday, noting that Tehran is seeking to shape a new kind of diplomacy in the world called, “Technological Diplomacy”.

“Today, Iran has the largest startups in the region in advanced sciences,” he added referring to the managers of over 40 Iranian knowledge-based companies attending the event.

Sattari emphasized that the new generation of Iranian knowledge-based companies developed by youth‎, and added, "These companies have learnt how to export their product.”

‎The official noted that‎ sales of these companies have topped over $12 billion.‎

“We have no restrictions on the transfer of our experiences to Syria," he said.