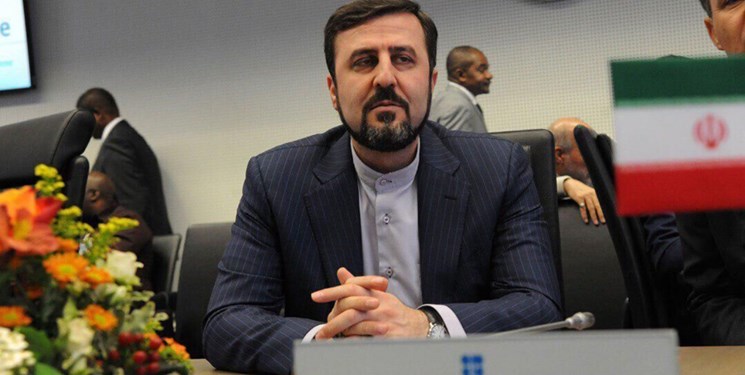 Qaribabadi said in a statement that the UN Nuclear Watchdog should avoid forging concerns on Iran’s peaceful nuclear program, stressing that the Agency had presented the results of its analysis and questions about two nuclear plants some two months ago.

The following is the full text of his statement,

In the Name of Allah, the Most Compassionate, the Most Merciful

The Director General’s latest report has different aspects which need to be elaborated more, and I intend to shed light on some of them.

Obviously, the Report of the Director General shows a significant fact that there are no safeguards related issue regarding Iran’s ongoing activities. This fact should be highly acknowledged.

As a result of Iran’s cooperation, all monitoring and verifications related activities of the Agency were carried out uninterrupted without a single impediment even during the high times of the pandemic and lockdown. In this regard, the reports of the Director General are self-evident.

To address the alleged issues mentioned in the DG’s report, Iran has shown its good-will and transparency by engaging actively with the Agency. Further to the numerous communications and responses provided by Iran in this regard, several high level visits by the Agency’s officials took place during past six months aiming at exchanging technical views. Unfortunately, the report does not reflect Iran’s cooperation properly.

It is worth noting that the abovementioned high level of cooperation provided by Iran is taking place during a grave disappointing circumstances mainly caused by numerous negative incidents including the sabotage at Natanz Enrichment Plant, heinous terror of one of our nuclear scientists, mayhem created by the US withdrawal from the JCPOA, etc.

Allow me to draw your attention to some of the points raised in the report of the Director General and give more clarifications to the extent possible.

On 2nd December 2020, the Islamic Consultative Assembly (Parliament) passed a law entitled “Strategic Action Plan to Lift Sanctions and Protect Iranian Nation’s Interest”. Article 6 of this law requires the Government to stop the implementation of all voluntary measures which have been accepted under the JCPOA and are beyond the Comprehensive Safeguards Agreement. Needless to say that, among those voluntary and transparency measures, Iran accepted implementation of the modified Code 3.1 based on paragraph 65 of the JCPOA. The JCPOA is a deal containing a balanced combination of rights and obligations and if the balance is damaged, all elements of the deal would be impacted.

Regarding the locations in question, Iran has shown its good-will by granting the requested accesses to those locations. On the first location, several visits, interactions and correspondences were carried out so far and necessary clarifications and explanations were also provided by Iran. In our side, the relevant technical experts have different views and assessments. Iran expressed its readiness to engage with the Agency to continue the technical discussions. Considering these circumstances, setting any artificial deadline for any kind of interactions does not serve the interest of either side.

On the other two locations, the Agency conveyed to Iran the results of the analysis and related questions just about two months ago. These analyses are currently under assessment and consideration by Iran with a view to provide necessary responses to the Agency.

In this context, raising artificial concerns and unnecessary and disproportionate aggrandization of few alleged issues which are not in relations with ongoing activities and do not enjoy any urgency, while Iran is still interacting with the Agency with a view to their resolution, could not bear any fruit except bringing about new difficulties. After all, one should not forget that it was Iran who showed its good-will and transparency and granted access to the Agency to the locations.

In this context, during the recent visit by the Agency’s Director General to Tehran (on 21 February 2021), officials of the Islamic Republic of Iran also emphasized the importance of avoiding any embarrassment as well as pursuing political approach regarding these issues which can damage the spirit of existing cooperation. In view of the good-will and transparency shown by Iran, in particular through providing access, they also reaffirmed the necessity of resolution of these issues at the earliest possible. Therefore, we welcome the proposal made by the Director General for engaging with Iran aiming at final and early resolution of such insignificant issues.

I would also like to seize the opportunity to elaborate on Israeli regime’s nuclear threat.

Since all in the Middle East region, except Israeli regime, are parties to the Nuclear Non-Proliferation Treaty (NPT) and have undertaken to accept the Agency's comprehensive Safeguards, development of a clandestine nuclear weapon program by this regime poses a continuing serious threat not only to the security and stability of the region and the world, but also to the effectiveness and efficiency of the NPT and the Agency's safeguards regime. Needless to say that Israel is not also a party to any other major treaties governing weapons of mass destruction (WMD).

It is noteworthy that Israeli nuclear capabilities and the associated threats have been on the agenda of the United Nations General Assembly and the International Atomic Energy Agency for decades, and many resolutions were adopted in those fora in this regard. Regrettably, this regime continues to ignore the international community by downplaying the significance of the Treaty, denying to accede to the Treaty and refusing to place all its nuclear facilities and activities under the Agency's comprehensive safeguards regime.

Ironically, Israel is now even enjoying a more preferential treatment as compared with that of the Nuclear Weapon States, since they are members to the NPT and have several obligations specifically under Articles I and VI of the Treaty. While for being still out of the NPT, Israel is free from any obligations under the Treaty, and enjoys all advantages of the IAEA Statute which are interlinked with the NPT.  Such a situation has given this regime the audacity to ridicule the authority and mandate of the Agency in preventing the diversion of its nuclear materials and activities.

It is a clear contradiction that Israel as a non-member to the NPT is enjoying the full rights and privileges due to its membership to the IAEA, while at the same time, it considers itself free from any responsibility, and participates in all deliberations of the Agency related to members of the NPT. Most importantly, this regime has become so cynically bold as to manipulate the realities and criticize other Members of the NPT on the account that they have obligations due to their membership in the Treaty, but Israel has not. This is a very serious shortcoming and failure in the work of the Agency, which should be addressed properly.

The Agency has a distinct role in implementing the decisions and resolutions of the General Conferences and must take a clear stand on unacceptability of Israel’s remaining outside the NPT framework and its continuing defiance to placing all its nuclear activities and facilities under the Agency’s comprehensive safeguards system. Thus, it is necessary to ensure that the International Atomic Energy Agency plays its role in dealing with this important issue, which is the core cause of concern for the international community as a whole and an additional source of instability and insecurity in the Middle East region. The Agency has no choice but to take appropriate measures to ensure that Israel places all its nuclear installations under the Agency’s safeguards and accedes to the Non-Proliferation Treaty as a non-nuclear weapon party.

It is an irony that, the Agency, its Secretariat, the Board of Governors and the General Conference are all concentrating on the Members of the NPT, while the chronic strategic mistake is to overlook Israel’s nuclear materials and activities in the volatile region of the Middle East. In this situation, what is the advantage of being both a NPT member and fully implementing the Agency’s safeguards? How could the international community see the IAEA as a serious, professional and impartial partner when it does not pursue evenly and justly the implementation of its comprehensive safeguards regime for all its Members, and yet does not seriously discuss the necessity of verification activities and inspections of, for-instance, Israel's nuclear program? Doesn’t the policy of silence and negligence about Israel’s nuclear program and the inaction policy in this regard, send a negative message to the members of the NPT meaning that “being a member of the Treaty equals accepting the most robust monitoring and verifications, while being outside the Treaty means to be free from any obligation and criticism, and even be rewarded”?!

To conclude, Madam Chair, I would like to refer to my letter simultaneously sent to you and to the Agency’s Director General on 25th of February 2021 and reiterate that in accordance with the applicable rules and regulations, the protection of confidential information is crucial for ensuring prevention of harmful consequences of sharing and releasing classified nuclear information. Against this backdrop, the Agency is required to seek agreement by the States directly concerned for publishing any information available to it by means of verification activities. Therefore, the Islamic Republic of Iran expresses its objection to the public release of the Director General’s report under this agenda item.