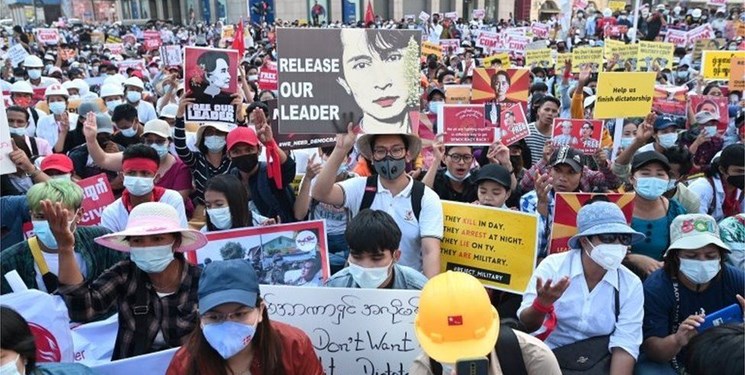 TEHRAN (FNA)- Another anti-coup protester has been shot dead and another fatally stabbed in Myanmar as a UN envoy urged a divided Security Council to hear the nation’s “desperate pleas” and take swift action to restore democracy.

Despite an increasingly brutal crackdown by the military authorities that has seen more than 50 people killed, protesters took to the streets again in towns around the country on Friday to denounce the February 1 coup, Al-Jazeera reported.

In Mandalay, Myanmar’s second-largest city, hundreds of engineers took to the streets crying “Free our leader” in reference to ousted State Counsellor Aung San Suu Kyi, detained by the military since the first night of the takeover.

A 26-year-old man helping set up barriers in the city to slow security forces died after being shot in the neck, medical officials told AFP news agency.

An official from Aung San Suu Kyi’s National League for Democracy was also stabbed to death along with his 17-year-old nephew in an apparent mob attack in the central Magwe region, local media reported.

The killings follow the deadliest day of the crackdown so far on Wednesday, when the UN said at least 38 people were killed as graphic images showed security forces firing into crowds and bloodied bodies dragged away.

Police also fired tear gas at demonstrators in the southern city of Dawei while protesters in the commercial capital Yangon were defiant despite the danger.

“Scared, yeah, I’m very scared to stay on the frontline. But we believe in our comrades and we promise to protect each other if someone is injured,” protester Didi, 27, told AFP news agency.

Thousands also rallied in the Southeastern Karen state, accompanied by fighters from the Karen National Union (KNU), an ethnic armed group engaged in a long-running war with the military.

The KNU said in a statement that it would not tolerate attacks on peaceful protesters by the army.

“People in urban areas, ethnic armed groups, and the international community must work together until the military dictatorship falls,” it said.

Crowds also gathered in Pathein, to the West of Yangon, and in central Myingyan, where dozens of women in straw hats held up signs calling for Aung San Suu Kyi’s release.

Schraner Burgener called on the council for “unified action”, asking “how much more can we allow the Myanmar military to get away with?” after the deaths of dozens of civilian protesters this week.

She said the situation in Myanmar was moving towards “an acute humanitarian crisis”.

“It is critical that this council is resolute and coherent in putting the security forces on notice and standing with the people of Myanmar firmly, in support of the clear November election results,” Schraner Burgener said.

The UN Security Council has voiced concern over the state of emergency imposed by the Myanmar military but stopped short of condemning the coup because of opposition from Russia and China.

“We don’t want to see instability, even chaos in Myanmar,” he said.

But Schraner Burgener warned that no country should recognise or legitimise Myanmar’s military government. She urged the Security Council to give its full support to Myanmar’s UN ambassador Kyaw Moe Tun.

Myanmar has been in turmoil since the army seized power and detained civilian government leader Suu Kyi and many of her National League for Democracy (NLD) party colleagues on February 1, after the military complained of fraud in a November election.