Zarif: US Needs to Lift All Anti-Iran Sanctions 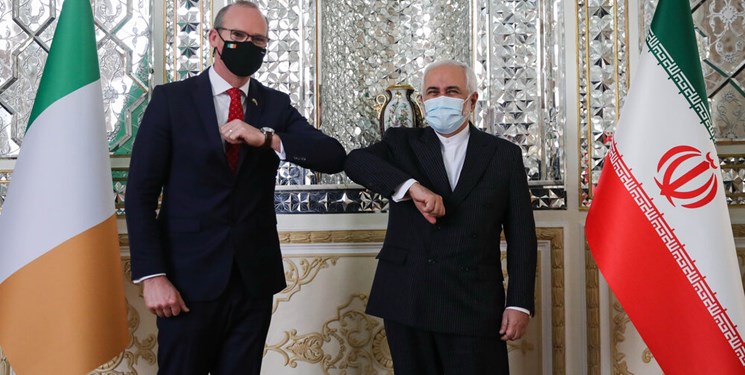 The US must remove the sanctions that it has imposed against Iran if it wants to return to the nuclear deal, Zarif said during his meeting on Sunday with the Irish Foreign Minister Simon Coveney in Tehran.

Coveney, for his part, said that the Irish embassy will be reopened in Tehran gradually.

During the meeting, both sides exchanged views on bilateral, regional, and international issues.

In relevant remarks earlier on Sunday, Iran’s President Hassan Rouhani said that activation of the Joint Comprehensive Plan of Action depends on the removal of all sanctions by the US and fulfillment of commitments by all signatories to the deal.

"Activation of the JCPOA as a multilateral international agreement is subject to the lifting of sanctions by the US and the fulfillment of obligations by all members," Rouhani said in his meeting with visiting Simon Coveney on Sunday.

"The best way to resolve problems with European partners at various bilateral, regional and international levels is to hold talks based on mutual respect and to avoid any threats and pressure," he added.

Criticizing the E3’s non-compliance with the JCPOA commitments, Rouhani added, "The Islamic Republic of Iran is committed to the JCPOA, but this situation will not continue and the full implementation of UN Security Council Resolution 2231 by all JCPOA participants is necessary to preserve it."

"Despite the suspension of the Additional Protocol [to Non-Proliferation Treaty], Iran is cooperating with the International Atomic Energy Agency," he noted.

Rouhani also called for development of Tehran-Dublin ties, saying, "The two countries have many unused capacities in all dimensions that should be used."

Simon Coveney, for his part, pointed to Ireland’s role as a non-permanent member of the UN Security Council for the next 2 years and the position of facilitator in the implementation of the JCPOA and UN Resolution 2231, saying, "Trump's withdrawal from the JCPOA agreement was a historic mistake, and the new US administration is determined to return to the deal."

"We will do our best to maintain the JCPOA and we are ready to play any role that can help to improve the situation and start the dialogue of all members on the deal," Coveney added.