Iranian President: No Option for US but Lifting Sanctions 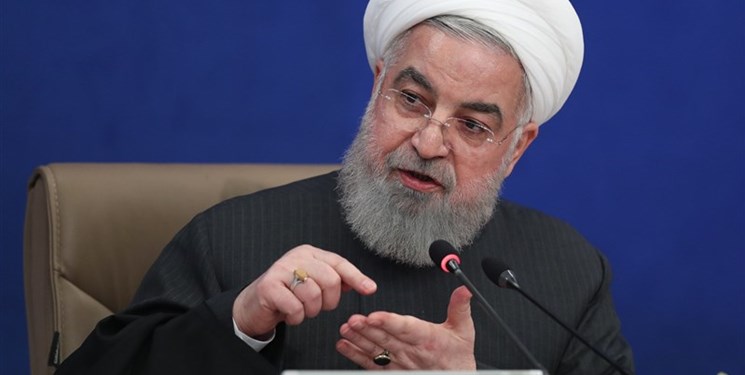 TEHRAN (FNA)- Iranian President Hassan Rouhani in a phone conversation with British Prime Minister Boris Johnson said that the US has no way but to remove the cruel sanctions against Tehran to return to the path of diplomacy.

“If we are after diplomacy, the path is clear… It’s the lifting of sanctions and the US fulfilling of its commitments, and there is no other option,” Rouhani said on Wednesday.

He said while the new US administration has voiced willingness to rejoin the nuclear deal and implement its commitments, it has failed to take any practical measure whatsoever.

“International cooperation has been damaged as a result of Trump’s policies, and unfortunately the United Nations and the Security Council have not been able to function properly and impartially during this period, and now it is time to work together to address such a shortcoming,” he noted.

The president laid out Iran’s unwavering policy as an “action-for-action” approach with regard to JCPOA commitments, saying that “Iran cannot and should not be the only party paying the price of preserving the JCPOA.”

He explained that all of Iran’s measures have been taken within the framework of the JCPOA with the aim of bringing a state of equilibrium to the deal in order to preserve it, making a reference to Iran’s reduction of its commitments under the JCPOA in response to the US withdrawal and harsh sanctions.

He pointed out that the Iranian people have been faced with greater problems in dealing with the coronavirus pandemic and other health issues due to the sanctions as well as the problems created by the US and its allies that have hindered Iran’s access to its financial resources outside the country.

“While we see that most countries are repaying their debts to Iran or unblocking Iran’s frozen assets, it is very strange that no practical progress has been made by Britain to pay back its 40-year-plus old defense debt to Iran,” he added.

“Undoubtedly, accelerating the repayment of Iran’s claims would be effective in solving other problems in bilateral relations,” Rouhani said.

Johnson, for his part, said while the UK “remains committed to making the Iran nuclear deal a success, Iran must stop all its nuclear activity that breaches the terms of the joint comprehensive plan of action and come back into compliance.”

Johnson "stressed the importance of Iran seizing the opportunity presented by the United States’ willingness to return to the deal if Iran comes back into compliance,” a statement from Johnson’s office said.

Iranian Foreign Minister Mohammad Javad Zarif said on Wednesday that his country distrusts the western states, specially the US, as they have not complied with their nuclear deal undertakings.

“Iran has always fulfilled its undertakings and it is the US that has withdrawn from the nuclear deal,” Zarif told reporters in Tehran.

He noted that Iran’s situation is quite clear and for a year after Trump left the nuclear deal, the US administration, itself, confirmed that Iran was implementing its nuclear deal undertakings, adding that five reports by the International Atomic Energy Agency (IAEA) have also confirmed the same.

"If the problem is distrust, it is Iran that is distrustful of the Western countries that have never implemented the nuclear deal properly and correctly,” Zarif said.

He said that Iran has always wanted full implementation of the nuclear deal, adding that if the West resolves this problem and fulfills its undertakings, Tehran will also implement the agreement immediately.

Iranian Government Spokesman Ali Rabiyee said on Tuesday that the US is not in a position to set conditions for implementing its nuclear deal undertakings, saying that lifting sanctions is the only solution to revive the agreement.

“The US is not in a position to set conditions for implementation of its international undertakings. Unlike the US, which is avoiding returning to the nuclear deal, Iran is ready to fulfill all its undertakings as soon as possible and in companionship with other members of the nuclear deal and the US. Based on the policy announced by the Supreme Leader (Ayatollah Khamenei), the only way to revive the nuclear deal is lifting sanctions and return of all parties to the full implementation of their undertakings,” Rabiyee told reporters in a press conference in Tehran.

“Once again, we recommend the White House to return to the nuclear deal unconditionally, just as the previous US president suddenly left the nuclear deal, and not to further complicate and harden diplomacy. I should remind you that in the last 4 years we, and not them (the US), have kept the way of diplomacy open, and today it is them who should take the first step in the way of diplomacy, not us,” he added.

Rabiyee noted that today, many countries are trying in good will to revive the nuclear deal, and added, “We are confident that this goal will be achieved in the near future because it is the only way to ensure world peace and guarantee the interests of all countries; the nuclear deal is international law and the US has no choice but to abide by the law.”

Asked about Iran’s position on exchanging prisoners with the US, he said, “There is nothing new about the exchange of prisoners; Iran's position has already been stated by the Foreign Minister, and we are ready to exchange all prisoners between Iran and the US. If this has not happened yet, it is because of the unpreparedness of the US government."

Elsewhere, Rabiyee referred to reports about releasing Iran’s US-blocked assets in a number of countries, and said, “These measures are insufficient. The Iranian government will no doubt strive to release what belongs to the Iranian people to the last cent, and it should be able to trade freely and gain access to its financial resources like all countries.”

Tehran had on Monday dismissed media reports about direct or indirect contacts between Iran and Washington, saying that close talks are being held, but with other parties to the nuclear deal.

“We have not and do not have any direct or indirect contact with the US about issues related to the nuclear deal or other subjects,” Foreign Ministry Spokesman Saeed Khatibzadeh told reporters in a press conference in Tehran.

“We have had very close talks with the (other) parties to the nuclear deal and we have not had any talks with the US. Inside Iran, some points are being reviewed and completed,” he added.

Asked if Iran will accept the US proposal to implement undertakings in a step-by-step plan, Khatibzadeh said, “Iran has neither received any step-by-step plan nor is such a plan in line with Iran’s declared policy.”

“No direct or indirect talks are being held between Iran and the US because the nuclear deal has clarified the path,” he said.

Zarif said on Sunday that the US should lift all sanctions against Tehran before rejoining the Joint Comprehensive Plan of Action.

The US must remove the sanctions that it has imposed against Iran if it wants to return to the nuclear deal, Zarif said during his meeting with the Irish Foreign Minister Simon Coveney in Tehran.