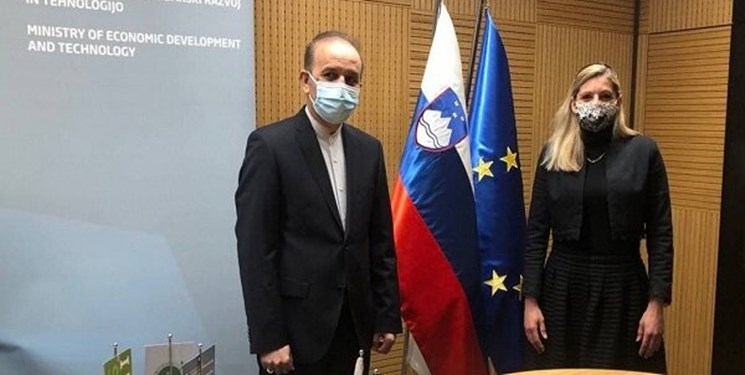 TEHRAN (FNA)- Iranian and Slovenian officials discussed ways to further develop economic cooperation between the two countries, specially by using the capacities of the private sector.

The meeting was held between Iranian Ambassador to Slovenia Kazzem Shafiyee and the deputy minister of Economic Development and Technology of Slovenia.

During the meeting, Shafiyee said the Iranian private sector is inclined to cooperation with Slovenian companies, announcing his readiness to facilitate the process.

In the meeting, the capacities of economic and trade cooperation between the two countries were examined.

The Iranian envoy referred to the increase in trade between the two countries in recent years.

"Increasing US sanctions against Iran and creating obstacles to banking and monetary cooperation, as well as the global spread of the coronavirus, has reduced the volume of trade between the two countries over the past two years," Shafiyee said.

The Slovenian official, for her part, said that "we know that trade relations between the two countries have been damaged by sanctions against Iran and the spread of the coronavirus”.

She noted that 80 percent of Slovenia's products are exported, adding that agricultural and pharmaceutical products should not be subject to sanctions.

"We are trying to have a more serious presence in the Iranian market," she added.

She stressed the need for more cooperation and interaction with Iran.

In a relevant development earlier this week, Slovenia Parliament Foreign Policy Committee Chair and Iran's Ambassador to Ljubljana in a meeting emphasized the need to expand parliamentary ties and trade, forming parliamentary friendship group and exchange of parliamentary delegations.

Underlining Slovenia's constant support for the JCPOA, Slovenian legislator Monika Gregorcic said that her country urges participants of the deal to find a comprehensive solution through negotiation.

She hoped that parliament diplomacy could help foreign policy apparatus in both Iran and Slovenia to increase cooperation in different fields.

Shafiyee, in turn, pointed to the good relations between the two countries and said that mutual trading had reached a favorable level, but lowered due to US sanctions in the past two years.

He introduced Iran's trade, technical and economic capacities in the areas pertaining to medicine, stem cells and nanotechnology.