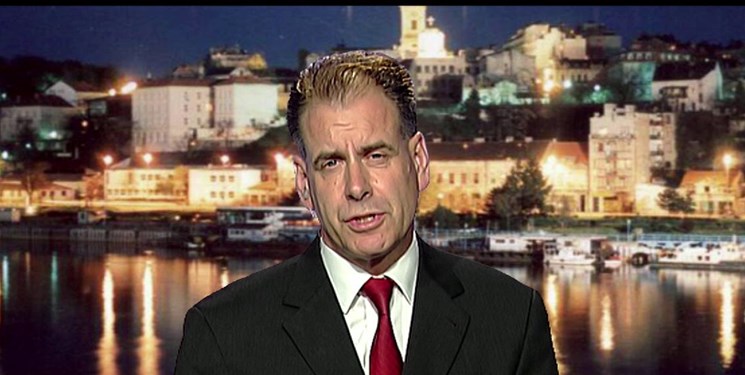 Speaking in an interview with FNA, John Bosnitch said American politicians’ job is to suppress the justice, and added, "The world has entered the information era… . After the court has ruled in favor of Iran, at least your media and the few honest independent journalists around the world will be able to circulate the decision and the text of the ruling, providing the “ammunition” of truth to all of us who are peacefully doing whatever we can for a better and more balanced world."

John Bosnitch is the head of the InterMedia Center news agency, specializing in reporting on conflict and development in the region of the former Yugoslavia. He is also a founding director of the human rights organization of the Jasenovac Memorial Center in Belgrade, and a board member of the Jasenovac Research Institute in New York City.

Q: The rulings of ICJ for Iran against the US’s sanctions do not seem to be binding at the UNSC. Then, what is the significance of the ICJ ruling?

A: This is one of the paradoxes of the current world order. Our planet is run by superpower governments that try to assert authority over smaller states by using the disguise of 'international law’. But the law that most of them follow is only the ‘Law of the Jungle’, or “might makes right”.

No international court ruling can legally overpower the absolute (nuclear) veto power of the permanent members of the UN Security Council. Thus the only significance of an “International Court of Justice” ruling against Washington will be a moral victory – but even that victory is limited by the fact the so-called sole-superpower (the USA) also has a stranglehold on the majority of the global media, meaning that the moral lesson of their loss at the ICJ will never even come to the attention of 90% of the people living in the USA or their NATO colony-“partners”.

Q: Despite its VETO power at the UNSC, the US did its best to block hearing of Iran’s application to the ICJ. Why did Washington make so much effort to block it?

A: If they can abort the truth before it is even born, it makes their job of suppressing justice much easier. After the court has ruled in favor of Iran, at least your media and the few honest independent journalists around the world will be able to circulate the decision and the text of the ruling, providing the “ammunition” of truth to all of us who are peacefully doing whatever we can for a better and more balanced world.

The ruling clique in Washington, which includes both Republicans and so-called “Democrats”, knows that the world has entered the 'information era' and that propaganda is the most powerful weapon of all in today’s world… soldiers will not fight if they do not believe in their leaders. The first fighting “division” in the US armed forces is Hollywood. They spin the web of lies that makes young people volunteer to fight and which convinces naive people around the world that bankrupt, racist America is a “paradise”.

Q: How do you expect the American lawmakers to react to the pro-Iran ICJ ruling?

A: Rulings outside of the United States have zero significance in domestic US politics. Power (and money) is the reason they went into politics and they know that the average US citizen does not even know where America is located on the globe, let alone Iran!

Biden is a very obvious puppet of the secret ruling clique in the USA known as the “Deep State”. That clique feeds on oil just like a vampire feeds on blood.

Trump was loud and obnoxious toward Iran, but his aim was to terrify Iran into submission without a major war. He considered war a big waste of money for the bankrupt US economy. He was a businessman first, before all else.

Biden, on the other hand, despite pretending to be from a different party, is really a fellow member (with the Bush family of the political insiders in Washington), who see Iran as a perfect target for attack – a country that has been so heavily demonized by the lying MSM that not many Americans would protest against a quick war on Iran. He is thus much more dangerous than Trump. Biden can also be easily deceived by the advisors around him because he is losing his capacities as he ages. He also demonstrated a willingness to make war in Ukraine, in the former Yugoslavia, and against Iran’s ally, Syria. He is certainly already under pressure from the billionaires who paid for his election campaign to take action against Iran as soon as possible. It is a dangerous time for Iran and your country must greatly increase its media and information profile internationally to defend the people and government of Iran.