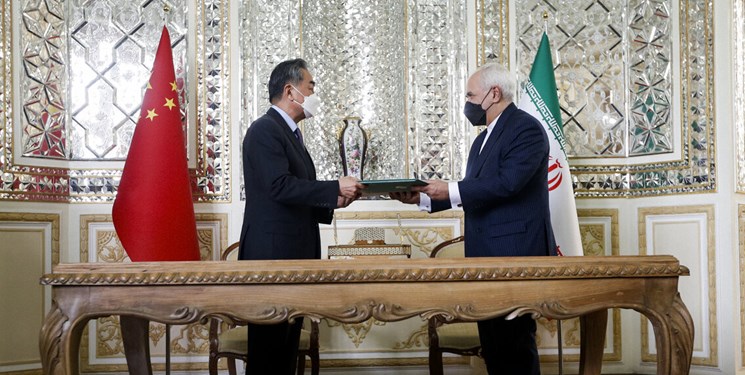 TEHRAN (FNA)- Iranian Ambassador to Brazil Hossein Qaribi described the Iran-China cooperation document as a foundation for new world order, and said that the two countries are determined to broaden their mutual cooperation.

"Today in Tehran: Iran and China finalized their first 25-year strategic framework, under which, they outlined their long-term economic and other interests. This is presenting a fine model for constructive engagement to serve people as the end beneficiaries," Qaribi wrote on his Twitter page.

"China-Iran partnership could set the foundation of a new ‘world order', with high respect for oriental values rather than the current failed ones that have been, in recent years, becoming extremely and aggressive," he added.

In a relevant development on Saturday, Iranian Foreign Minister Mohammad Javad Zarif and his Chinese counterpart Wang Yi in a meeting in Tehran signed a comprehensive strategic cooperation document.

The Chinese foreign minister met Larijani who has taken the lead on coordinating the efforts to sign the Sino-Iran comprehensive cooperation agreement.

During the meeting in the Iranian capital today, the two sides reviewed the expansion of mutual cooperation.

Chinese Foreign Minister Wang Yi arrived in Tehran on Friday for visit at the official invitation of his Iranian counterpart Mohammad Javad Zarif.

During Wang Yi's visit to Tehran, which was taking place on the 50th anniversary of the establishment of diplomatic relations between the two countries, it was scheduled that the 25-year comprehensive cooperation agreement between the Islamic Republic of Iran and the People's Republic of China to be signed by the foreign ministers of the two countries.

The Iranian Foreign Ministry Spokesman Saeed Khatibzadeh said on Friday that "tomorrow (Saturday), a 25-year cooperation agreement will be signed between Iran and China".

The expansion of the Tehran-Beijing cooperation horizon was implemented with the Chinese Foreign Minister's visit to Iran, and the signing of several comprehensive cooperation documents in various fields was an important focus of Wang Yi's visit to Tehran.

In a relevant development on Saturday, Iranian President Hassan Rouhani in a meeting with Wang Yi in Tehran underlined that Tehran-Beijing relations are at a very significant and strategic level in different areas.

"Tehran and Beijing have very good ties and their shared stances on international issues are evidence to that," President Rouhani said during the meeting in the Iranian capital yesterday.

The Iranian president pointed to the 50th anniversary of diplomatic relations between Iran and China, as well as bilateral, regional, and international collaborations, and called for accelerating the implementation of agreements on infrastructural and developmental projects.

President Rouhani, meantime, appreciated Beijing for supporting Iran in the international arena, countering US unilateralism and excessive demand, and condemning the US sanctions against Iran.

He also called for the expansion of cooperation between the private sectors of Iran and China.

President Rouhani also said that Iran is willing to purchase more COVID-19 vaccines from China, adding that the two countries should share their experiences, especially in making the vaccine, in countering the pandemic.

The Chinese foreign minister, for his part, said that China has always attached great importance to relations with Iran and despite some issues, it has tried to prioritize the issue.

Regarding the COVID-19 vaccine, Wang said that China stands by Iran in providing the doses and will definitely have effective cooperation with Iran in this regard.

"Based on the agreements, China will provide Iran with more vaccine and that Iran is a priority for China in the issue," the Chinese foreign minister added.