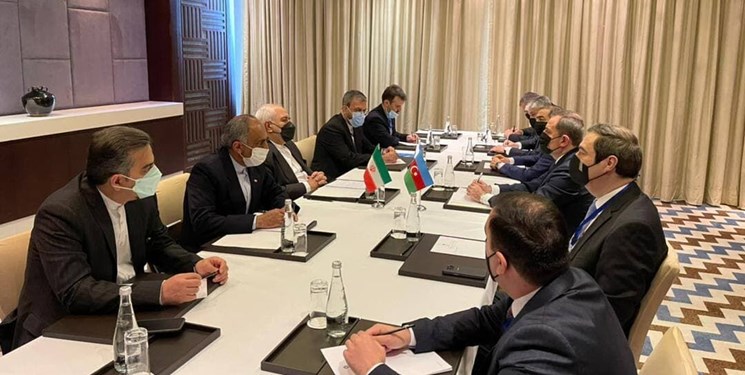 During a meeting on the sidelines of the “Heart of Asia” Conference in Tajikistan’s Dushanbe on Tuesday, Zarif and Bayramov conferred on issues of mutual interest and stressed the need for further cooperation.

They also discussed the latest developments in the Caucasus as well as bilateral cooperation in the Caspian Sea.

Zarif arrived in the Tajik capital of Dushanbe on Monday for a 2-day visit to participate in a ministerial meeting of the Heart of Asia – Istanbul Process initiative and to meet with the Central Asian country's high-ranking officials.

The two sides also highlighted the important role of the joint commission for cooperation between the two countries.

The Iranian foreign minister and President Rahmon also called for cooperation in the fight against terrorism and extremism, drug trafficking and other cross-border organized crime.

Also on Monday, Zarif and his Afghan counterpart Hanif Atmar in a meeting in Dushanbe underlined the need to expand bilateral relations in different fields.

During the meeting held on the sidelines of Heart of Asia Conference in Tajikistan's capital on Monday, Zarif and Atmar explored avenues for further bolstering and reinvigorating mutual cooperation.

During the meeting Zarif blasted the efforts made by some countries and movements to harm Iran-Afghanistan relations.

The Iranian foreign minister, meantime, pointed to lifting consular limitations for Afghan nationals, and said that these measures are aimed at fighting human trafficking gangs.

He also called for efforts to clarify Afghan nationals’ presence in Iran.

Atmar, for his part, appreciated Iran’s assistance in containing fire in Afghan customs at common borders.

He described Iran as the closest friend for Afghanistan and called for developing constructive cooperation and consultations in economic and political fields.