DM: No Problem for Export of Iranian Defense Equipment 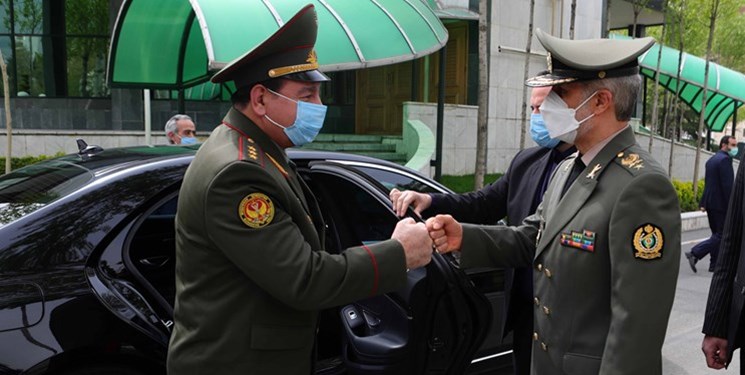 TEHRAN (FNA)- Iranian Defense Minister Brigadier General Amir Hatami said on Tuesday that arms embargoes against his country have expired and there is no problem with exporting weapons and military equipment.

“Despite the cruel sanctions and heavy pressures, the Islamic Republic of Iran has made significant progress in various areas in recent years. Fortunately, in October 2020, the arms embargo against the Islamic Republic of Iran ended in accordance with the Security Council resolution, and we have no problem with exporting defense items and equipment,” General Hatami said in a meeting with his Tajik counterpart General Shir Ali Mirza in Tehran.

Elsewhere, he voiced concern about the presence of the ISIL and other terrorist and extremist groups in certain regional states, saying, “We have always stated our opposition to the presence of trans-regional forces in different wars and conflicts. It does not differ if it is in Syria, Iraq, Afghanistan or elsewhere.”

“The Islamic Republic of Iran, with its approach to resolve the problems and issues in the region with the presence and participation of the regional countries, has paid great costs to restore peace and stability in the region, the most important and irreparable part of it was martyrdom of General Soleimani, the hero of fighting terrorism and extremism,” General Hatami said.

General Mirza, for his part, stressed the importance of cooperation between the two countries in establishing peace, stability and security in the region, saying that conflicts and insecurities in the region redouble the need for mutual cooperation in the fight against terrorism, smuggling goods, trafficking drugs and in the development and strengthening of regional security.

In relevant remarks in December, General Hatami announced that the country has inked several contracts to export weapons and military equipment to other countries.

A number of contracts have been concluded in the field of arms exports to other countries, General Hatami said.

He added that negotiations are underway with various countries in the field of purchasing arms.

Iran’s arms cooperation with some countries was and will be pursued well both during the period when the Americans imposed arms sanctions against the country and after they were lifted, General Hatami said.

Also, in November, Iranian Foreign Ministry Spokesman Saeed Khatibzadeh said that given the expiration of the arms embargoes against his country, Iran would be entitled to supply the friendly states’ defensive needs.

“Iran is a responsible government and is not (only) after selling weapons but it is after defensive cooperation and of course, given the removal of the arms restrictions on Iran, the country is entitled to meet other countries’ legitimate needs,” Khatibzadeh told reporters in a video conference in Tehran.