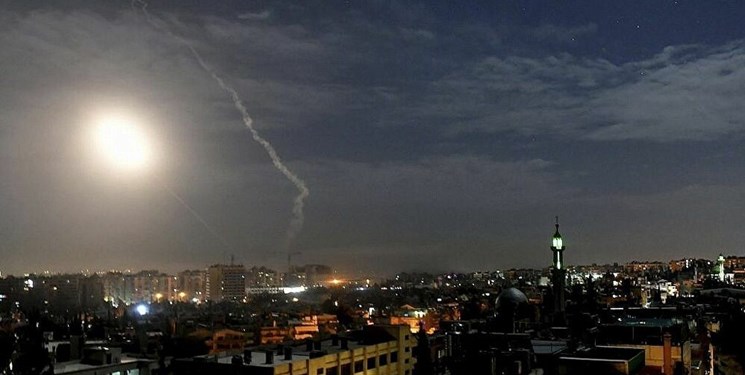 TEHRAN (FNA)- The Syrian Army intercepts missiles fired by the Israeli regime from the Lebanese airspace towards the capital Damascus countryside.

The Syrian Arab News Agency (SANA) cited a military source as saying that the attack by “the Zionist enemy” targeted the vicinity of the capital in early Thursday local time.

The Arab country’s air defenses shot down “most” of the projectiles, the source added.

Explosions were heard in the capital, and Syrian media outlets published videos of the counterattack.

The military source stated that four servicemen had been injured in the Israeli assault that also left some material damage.

Al-Manar television network reported that the Syrian anti-aircraft gunnery had also intercepted and fired at an Israeli military aircraft over the border area with Lebanon.

Syria and the Tel Aviv regime are technically at war due to the latter’s 1967-present occupation of the Arab country’s Golan Heights.

The regime has been targeting the reinforcements belonging to the Syrian military and its allies since 2011, when the country found itself in the grip of overwhelming foreign-backed militancy.

Tel Aviv escalated its attacks and also began lending medical assistance and refuge to Takfiri terrorists in the occupied part of Syria after Damascus and the countries assisting it against the foreign-backed outfits began scoring decisive victories.

In 2018, the Israeli regime provided safe passage for the White Helmets, a Western-backed so-called aid group, as the Syrian military was closing in on them. The group has been found culpable by Damascus and its ally Russia of trying to stage false-flag chemical attacks in Syria to pave the way for Western military offensives against the Syrian soil.