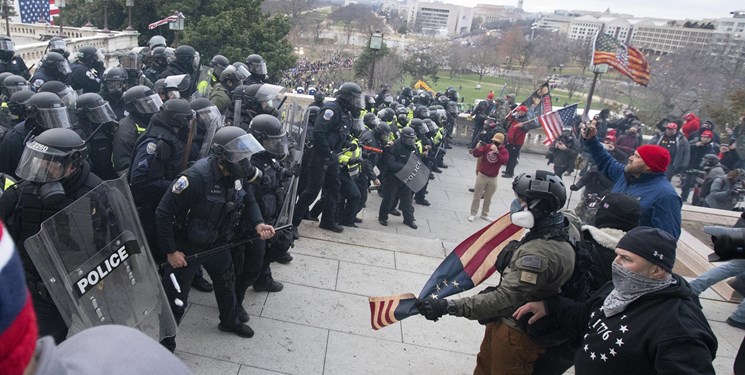 TEHRAN (FNA)- A man who allegedly assaulted officers during the Capitol riot, including spraying at least one law enforcement agent with an irritant, was arrested Wednesday on multiple charges related to the January mob of Donald Trump supporters.

Christopher Joseph Quaglin, of New Jersey, is accused of “repeatedly assaulting multiple law enforcement officers” based on video evidence described in probable cause affidavit signed by an FBI agent. He is facing charges of civil disorder, obstruction of a proceeding, and assaulting, resisting or impeding certain officers or employees, according to the Department of Justice, NBC News reported.

At about 1:36 pm, Quaglin is seen on body-worn camera footage in a “Make America Great Again” jacket, black helmet, and gas mask at a fence guarded by officers outside the US Capitol Building in Washington, D.C., on January 6.

Seconds later, Quaglin begins shaking and pushing at the fence, the affidavit said. He’s allegedly seen about an hour later in surveillance video around the Lower West Terrace shoving multiple officers from both the US Capitol Police and Metropolitan Police departments.

As officers in the Lower West Terrace area began to drop their shields and retreat, Quaglin joined others in passing the shields among the crowd and lunging at officers, the affidavit added. Quaglin and other rioters then moved forward into the tunnel leading to the Lower West Terrace, where officers used their bodies to block rioters from entering, video showed.

It was in the tunnel where Quaglin sprayed an officer, according to YouTube footage reviewed by the FBI. The footage showed Quaglin aimed “a chemical irritant directly into the face of an MPD Officer, who does not have a face shield or gas mask protecting him”, according to the affidavit.

It appeared that the spray used was a MK-9 OC defense spray commonly sold online, based on the information in the affidavit.

Rioters then began to shove their bodies toward the line of officers who were defending the doors, shouting “heave ho” as they rushed together in a coordinated effort to breach the Lower West Terrace doors. Quaglin was at the front of this group until officers were able to eventually push the mob back, according to the affidavit.

The FBI reviewed social media posts belonging to Quaglin before and after the riot, specifically a Facebook account under a “vanity name” of “Chris Trump”, after receiving an anonymous tip. In one video, a man identified as Quaglin described what he was wearing for “when you guys see the footage”, according to the footage.

“It was a great time, I got bumps and bruises,” Quaglin stated in one of the videos.

A witness who contacted the FBI after seeing Quaglin’s image published by the agency seeking more information said they had known Quaglin for years. They confirmed that the “Chris Trump” in the Facebook Live videos was Quaglin and noted that Quaglin has “ frequently been banned for inflammatory posts online”.

Social media posts and messages between November and January reviewed by the FBI belonging to Quaglin included numerous photos of weapons, claims of “looking forward to a war” and complaints about Trump’s 2020 election loss, the affidavit added.

“Thats my basement gun room,” Quaglin said in a message, which included a photo of weapons and body armor, adding, “I have been planning for this since f------ Bush left office and Obama came in.”

Quaglin had an initial appearance in federal court Wednesday. Court records were not immediately available for him and it is unclear whether he has retained an attorney. Public records for Quaglin did not include a phone number or email address.