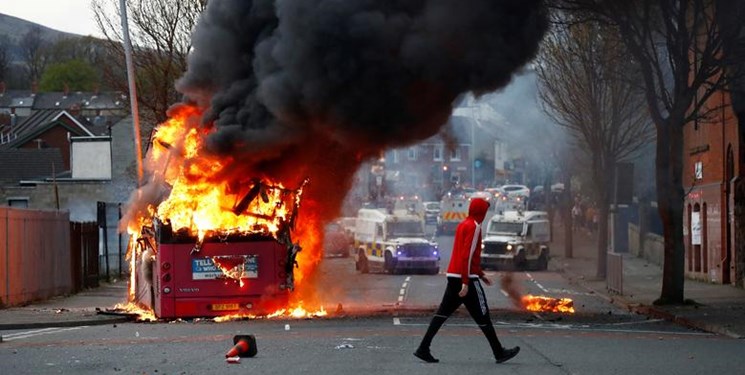 TEHRAN (FNA)- Masked youths hijacked and set on fire a bus in West Belfast on Wednesday night as the Northern Irish capital was rocked by a sixth night of violence.

Rioters converged on the so-called peace line street that connects the loyalist community of Shankhill Road with the nationalist Springfield Road, Euronews reported.

As well as the bus driver, police officers were attacked by youths throwing rocks and Molotov cocktails and a journalist was assaulted.

British Prime Minister Boris Johnson stated he was "deeply concerned" by the scenes of violence, noting, "The way to resolve differences is through dialogue, not violence or criminality."

First Minister Arlene Foster condemned the rioters and branded their behaviour an embarrassment to Northern Ireland.

"This is not protest. This is vandalism and attempted murder. These actions do not represent unionism or loyalism," she said.

In a statement, Northern Ireland's police federation condemned "shocking scenes which could set our society back years" and "violence on both sides of the interface at Lanark Way", adding, "Calm is needed on both sides of the gates before we are looking at a tragedy. These are scenes we hoped had been confined to history."

A total of 41 police officers have been injured during six nights of violence on the streets of several cities in Northern Ireland, including Londonderry and Belfast.

It comes at a time of rising tensions between Loyalist and Nationalist political factions in Northern Ireland and amid a COVID-19 lockdown.

Northern Ireland's Stormont Assembly has been recalled for an emergency debate on the violence.