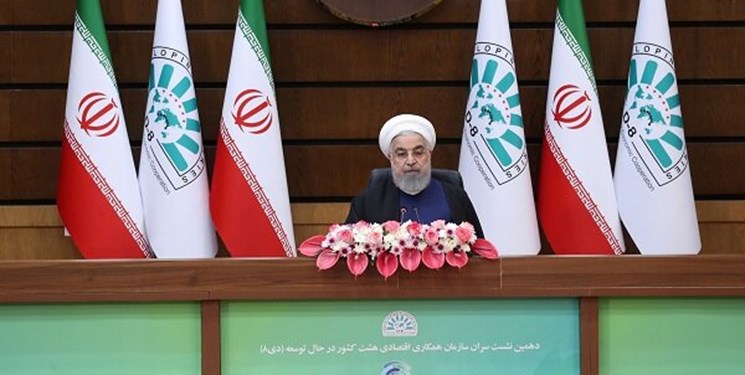 TEHRAN (FNA)- Iranian President Hassan Rouhani warned on Thursday that strengthening multilateralism is a priority of his government, warning that unilateralism and economic terrorism threaten the world community.

"Strengthening multilateralism is of the Islamic Republic of Iran’s top foreign policy priorities. From the standpoint of economic development, too, we have invariably supported the developing and attuned countries’ collective strive for a fair and non-discriminatory international economic system. The ultimate goal of all these collective and legitimate efforts by developing countries is to attain economic growth, balanced development, public welfare and prosperity, and to preserve national values and cultures and secure a decent status in international relations," Rouhani said, addressing the 10th Summit of the D-8 Organisation for Economic Cooperation held via video conference on Thursday.

"It is by way of this very approach, that we have become an active member of international and regional groupings such as the Group of 77 (G77), Indian Ocean Rim Association (IORA), Economic Cooperation Organisation (ECO), Cooperation Mechanism of the Caspian Littoral States, and, of course, the D-8. From the vantage point of convergence and business interaction, we are laying the foundations of free regional trade with neighbouring countries and we will soon establish, together with the Eurasian countries, the first free-trade zone," he added.

"Notwithstanding its geographical dispersion, the D-8 Organisation enjoys tremendous capacities and bounties of, inter alia, human and natural resources, energy reserves, complementary economies and avid private sectors. Further, we all have more or less similar challenges on our paths to economic development. The last of these challenges is COVID-19 pandemic which has upset the countries’ entire constellation of economic and developmental calculations and designs, projecting before the global community a form of uncertainty in their future prospects. The D-8 Member States have waiting for them around the corner important decisions to make in order for cooperation in the post-COVID era. Looked through this glass, the present Summit may align Member States and the Secretariat on a clear path forward," Rouhani said.

He noted that ever since the dawn of the D-8, the Islamic Republic of Iran has endeavoured to play its part in the accomplishment of the lofty objectives of the Organisation, adding, "Such measures as the establishment of the D-8 International University and D-8 Technology Transfer and Exchange Network, which, combined, target two key areas of ‘education and human resource development’ and ‘development of technological cooperation’ among eight countries, are testimony to our efforts. We are fully prepared to participate in the operationalisation of D-8 agreements in IT, trade facilitation, investment, agriculture, petrochemicals, science, health, tourism, and facilitation of visa issuance."

"Given the importance of foreign trade for national development and public welfare of the great people of D-8 Member States, I would like to stress that the current trade volume among the eight countries is a far cry from the actual trade potentials of the D-8. As such, it is necessary that certain mechanisms be developed for the facilitation and promotion of trade among Member States, including through customs and banking facilities and mechanisms as also non-banking ones. In this context, such proposed initiatives as a D-8 chamber of barter trade and D-8 credit cards may be helpful," the Iranian president said.

He underlined that an invaluable asset of the D-8 countries, in addition to their rich Islamic culture and immense human capital, is the huge market of the eight countries and – potentially – those of other Muslim countries, noting, "With such a market, it is possible to jointly invest in areas that demand large-scale investment and market. The large industrial and research and development mega-projects of modern economics that have already been studied and decided within the Organisation, deserve a revisit and serious action."

"Further to the disaster of COVID-19, unilateralism, economic terrorism and the way they have been addressed are among the issues that have stained the features of the international community. Actions like these not only illegally and illegitimately target sovereign governments and independent nations, but are also a serious threat to the achievements of the international community. More to this, the World of Islam has fallen quarry to organised Islamophobia. This organised Islamophobia has not only targeted the sublime values of Islam, but it has also brought with it wider adverse economic and developmental consequences for Muslim countries," Rouhani warned.

"I am proud to announce that the US illegal and unilateral measures aimed to bring the great nation of Iran to its knees have failed and despite the strong headwind of colossal economic pressure, by relying on our own willpower and domestic might, we have managed to do great feats and make significant breakthroughs in various areas including the fight against COVID-19 pandemic and its impacts and consequences. The illuminous testament to the failure of the United States in the war it has waged on the Iranian people is that Iran, struggling with sanctions and the coronavirus combined, managed to secure an economic growth of more than 2 per cent in the year when the world economy shrank by 3.5 per cent and many a country experienced negative economic growth of -5 to -10 per cent," he said.

Rouhani said that in the past four years, the international community has witnessed as the US economic warfare against Iran has intensified, adding, "These oppressive sanctions have inflicted substantial damage to our country. The nuclear deal, which the US violated and maximally tried to obliterate, has been preserved owing to the Islamic Republic of Iran’s tactfulness. The US must return to the JCPOA, first, by lifting the sanctions and adopting practical arrangements; for that is the obligation of the same government that has reneged on the promise. The Islamic Republic of Iran will but respond to US action by positive action."

"In conclusion, I would like to reaffirm the will of the Islamic Republic of Iran and the country’s public and private sectors to deepen cooperation within the framework of the D-8. I wish to thank Your Excellency and your colleagues for the organisation of this summit," he concluded.

The D-8 Organization for Economic Cooperation, also known as Developing-8, is an organisation for development cooperation among the countries, including Bangladesh, Egypt, Indonesia, Iran, Malaysia, Nigeria, Pakistan, and Turkey.

The objectives of D-8 Organization for Economic Cooperation are to improve member states' position in the global economy, diversify and create new opportunities in trade relations, enhance participation in decision-making at international level, and improve standards of living. D-8 is a global arrangement rather than a regional one, as the composition of its members reflects.

Organization for Economic Cooperation (D-8) is a forum with no adverse impact on bilateral and multilateral commitments of the member countries, emanating from their membership to other international or regional organizations.

Iranian Foreign Minister Mohammad Javad Zarif said that the country is ready for more cooperation in different fields and expansion of trade ties with the D8 states.

Zarif made the remarks, addressing the 19th D-8 Council of Ministers Meeting held in Kazakhstan on Wednesday.