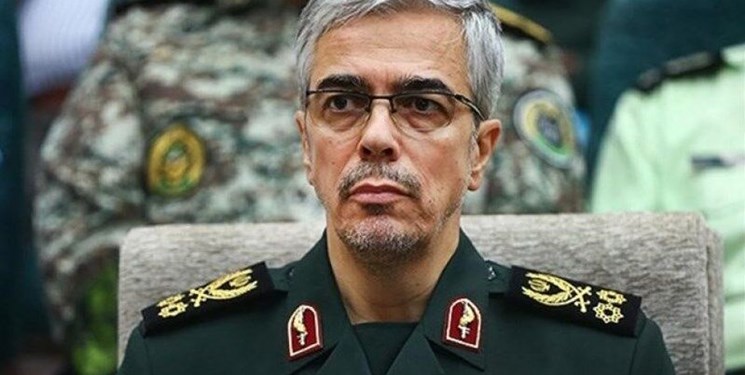 TEHRAN (FNA)- Chief of Staff of the Iranian Armed Forces Major General Mohammad Hossein Baqeri said that the Democrat government of Joe Biden has yet done nothing but hollow promises to lift sanctions against Iran, stressing the need for complete removal of embargos and verification by Tehran.

“The enemy, which used war rhetoric and threats, left the scene scandalously and another government (in the US) came to power. The maximum pressures of the enemy in the new (US) government have brought nothing but promises and deception, and experience shows that democratic governments which come to power in the US hide their steel claws in velvet gloves and constantly hatch plots and make empty promises about expanding the economy and lifting the sanctions (against Iran) and they attempt hard to cause some events with lengthy negotiations along with new demands,” General Baqeri said, addressing a virtual meeting with the Law Enforcement Police commanders on Saturday.

He noted that the strategic policy of the Islamic Republic of Iran, as outlined by the Supreme Leader, is based on only a full removal of sanctions, saying, “Sanctions imposed against the Islamic system under any pretext, should be lifted completely and verified in practice; that is when Iran, which has always been honest and committed to its promise, returns to its undertakings.”

In relevant remarks on Friday, Iranian Deputy Foreign Minister Abbas Araqchi said that termination of all US sanctions is a necessary step to revive the Joint Comprehensive Plan of Action.

“The removal of US sanctions against Iran is the necessary step for revival of the nuclear deal,” Araqchi said at the second round of the 18th Joint Commission of the JCPOA was held in Vienna.

“Iran’s main stance is the removal of all sanctions by the US,” the official said, stressing that Tehran will not halt or even reduce the pace of its nuclear activities in particular in uranium enrichment sector.

“The 20 percent uranium enrichment is going forward,” he said, adding that the trend will go on until an accord will be reached, which will force the US to lift all sanctions.

The official further emphasized that Washington must lift all sanctions in one stage.

Araqchi went on to say that a long way is still ahead; although, the pace of negotiation is moving forward and the atmosphere of the talks are constructive.

Also, Supreme Leader of the Islamic Revolution Ayatollah Seyed Ali Khamenei said any US claim about removal of sanctions should be verified by Iran, meaning that Iran should be able to sell its oil and receive its money under normal conditions.

The Instagram account also released a video in which Ayatollah Khamenei stressed that Tehran is in no hurry for Washington to come back to the nuclear deal.