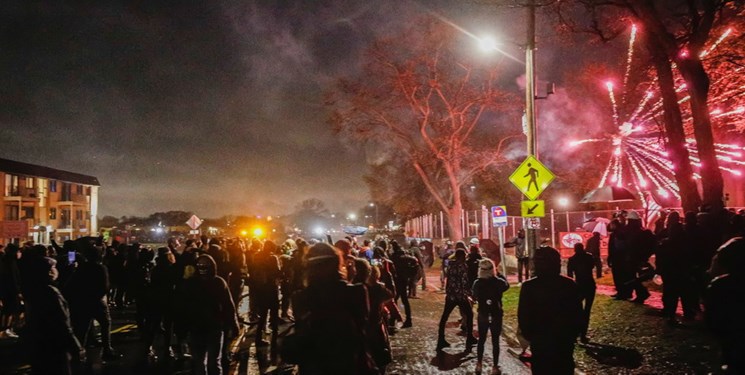 TEHRAN (FNA)- Flash-bangs and teargas were used to disperse the crowd gathered outside the Brooklyn Center, Minnesota police department, in violation of the curfew declared to stop the riots over the death of Daunte Wright.

Some of the activists outside – carrying shields and umbrellas and wearing helmets – responded by throwing fireworks and smothering gas canisters with traffic cones.

A “wall” made up of concrete barriers and chain-link fence was set up around the police station earlier in the day, and appears to have been effective at keeping the demonstrators away.

During last year’s protests against the death of George Floyd in nearby Minneapolis, activists breached the Third Precinct of Minneapolis PD and burned it to the ground.

Police began making arrests shortly after 9 pm local time, starting with a pale, shirtless activist kneeling outside the fence shouting “Black Lives Matter”. A line of officers in riot gear physically pushed protesters about a block away from the precinct.

State troopers advanced on a makeshift barricade set up by the activists and continued making arrests as they dismantled it.

At least 10 people were arrested when they got too close to the police line.

While activists chanted and confronted the police, a group of looters sacked the nearby Dollar Tree store and set it on fire.

Protests first erupted in Brooklyn Center, a community Northwest of Minneapolis, on Sunday after a police officer shot and killed 20-year-old Daunte Wright, an African-American man, during a traffic stop.

A female officer “accidentally discharged” her firearm into Wright when he slipped away from her partner and tried to escape in his car, police announced after releasing body camera footage of the incident. She was giving a “taser” warning and believed to have been using her stun gun instead. Wright had an outstanding warrant for a gun violation.

Minnesota's Department of Public Safety identified the officer as Kim Potter, a 26-year veteran of the Brooklyn Center PD, as the officer who fatally shot Wright.