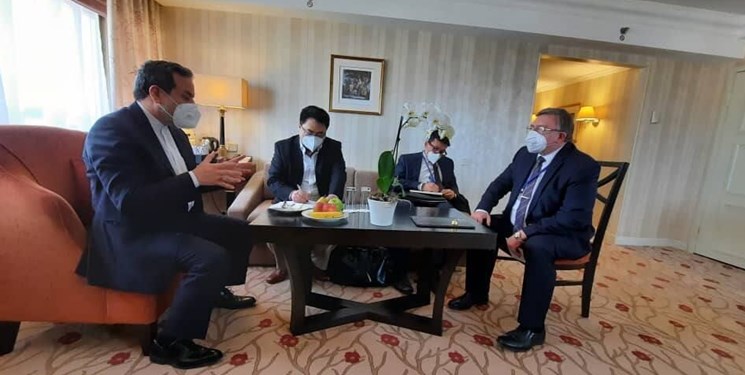 During the trilateral meeting on Friday night, the heads of the Iranian, Russian, and Chinese negotiating teams  discussed the progress in the JCPOA talks.

In a relevant development earlier on Friday, the heads of the three European delegations (Germany, Britain, and France) met and held talks in a joint meeting with Araqchi

"Despite last week's incident at the Natanz nuclear site, the JCPOA members remain ready for negotiations to go ahead," Mora said.

Araqchi led Iran’s delegation which includes representatives from the Central Bank of Iran (CBI), the Oil Ministry, and the Atomic Energy Organization of Iran (AEOI).

After the incident the #نطنز (#Natanz) became the first trend on Persian Twitter. The Iranian people, officials and analysts reacted to this act of sabotage and shared their protest on social media platforms.

“The attack on Natanz facility is part of negotiations in Vienna. They want to say that if you do not shut down (the installations) and resist, we will shut it down ourselves or do something that you will not be able to revive your activities for a long time, or maybe it will be to persuade Iran to return to the nuclear deal in full. I think increasing enrichment to 60% is the right answer, and if the parliament makes such a decision, no one can say no,” Head of the parliament’s Research Center Alireza Zakani said.

Also, Chairman of the parliament’s Energy Commission Fereidoun Abbasi Davani said that the attack showed that “we should change our definition of diplomacy”.

He added that the perpetrators of the attack want to intimidate Iran amid the Vienna talks, stressing that they should receive a harsh response.

Also, former Oil Minister Rostam Qassemi called for giving a harsh response to the attack, saying that the Iranian Army and Islamic Revolution Guards Corps (IRGC) are losing their patience towards such acts of sabotage.

Former Iranian Defense Minister Brigadier General Hossein Dehqan also described the incident as an industrial sabotage act, saying that Iran will not surrender to such acts.

Senior Political Analyst Seyed Mostafa Khoshcheshm also said that the Sunday sabotage operations at Iran’s nuclear facility in Natanz was part of the pressures exerted on Iran under the carrot and stick policy, stressing that capability to produce highly-enriched uranium would reciprocate the US pressures and give Tehran an upper hand in Vienna talks.

Khoshcheshm further underlined the need for Iran to give a combination of a devestating response and a series of tactical strikes at Israel.

Meantime, Mohammad Sadeq Koushki, another political analyst, blasted Israel for the incident, saying that the regime will end its acts of sabotage only after receiving a heavy blow.

“The solution is to deal a heavy blow to the Zionist regime; a blow whose intensity will keep the regime from terrorist moves against security and interests of the Islamic Republic of Iran,” he added.

Also, Parviz Amini, a political sciences university professor, underlined the need for Iran to give a crushing response to the masterminds of the attack, saying that any concessions that the Americans and Europeans make in negotiations does not worth if the country does not respond to aggression.