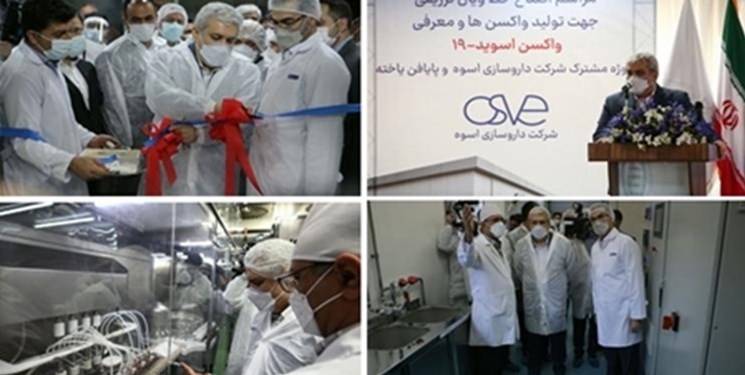 TEHRAN (FNA)- An Iranian knowledge-based company has manufactured the automatic machinery needed to fill the vials with indigenized coronavirus vaccine.

The knowledge-based firm, Osveh Pharmaceutical Company, provided the equipment for filling the vaccine vials and launched an industrial line to this end, and Paya Fan Yakhteh Company can produce the vaccine using these facilities in case of obtaining the necessary approvals.

The product line enjoys the capacity to fill millions of vials of vaccine annually and vaccine companies in Iran can use this new line to fill coronavirus vaccine vials.

“Joint investment and cooperation between the two companies has led to the creation of a new vaccine vial filling line, which paved the way for the development of infrastructure to produce vaccine,” Iranian Vice-President for Science and Technology Sorena Sattari said, addressing a ceremony to unveil the equipment.

According to the company's officials, the industrial line has the capability to fill 6,500 vials of vaccine per hour.

Spokesman for Iran’s National Task Force for Fighting Coronavirus Ali Reza Rayeesi announced on Saturday that the country will mass-produce and distribute one or two indigenized coronavirus vaccines in the first month of summer.

“Fortunately, domestic production has reached a good stage. Shafa Farmad coronavirus vaccine, produced by Barekat Foundation, is on the verge of the third phase, and if it proves successful, we can have it completely,” Rayeesi, also the deputy health minister, said.

“If the Food and Drug Administration of Iran (FDAI) gives the necessary permissions, we are very much hopeful that at least one or two vaccines from the above-mentioned vaccines will be distributed in mass in July,” Rayeesi said.

Rayeesi said earlier this month that the second phase of public vaccination against COVID-19 in Iran will start early in May.

Iran has placed orders for 16.8 million doses of vaccines under COVAX despite restrictions facing the country because of US sanctions which make it almost impossible to transfer funds through the international banking system.

Iran would need 29.5 million vaccine doses to finish the second round of inoculations and authorities hope they would be able to use home-made jabs to deliver on the job

A major Iranian factory mandated to produce the country’s main coronavirus vaccine (COV-Iran) is nearly ready as officials promise it would reach a production capacity of 12-15 million doses per month in late June.

Head of the COV-Iran Barekat vaccine project at the Headquarters for Execution of Imam Khomeini’s Order (HEIKO) Hassan Jalili said earlier this month that the construction of buildings and premises of the factory that will manufacture the vaccine has already finished, adding that the factory will produce 12-15 million doses of the vaccine per month in early summer.

He said that around a third of the machinery needed in the plant to scale up vaccine manufacturing has been installed, adding that another 20 percent of the equipment are being set up so that the factory would be ready according to a pre-announced timetable.

“As we had promised, we will bring the semi-industrial production capacity of the vaccine to three million doses per month in the spring,” Jalili said.