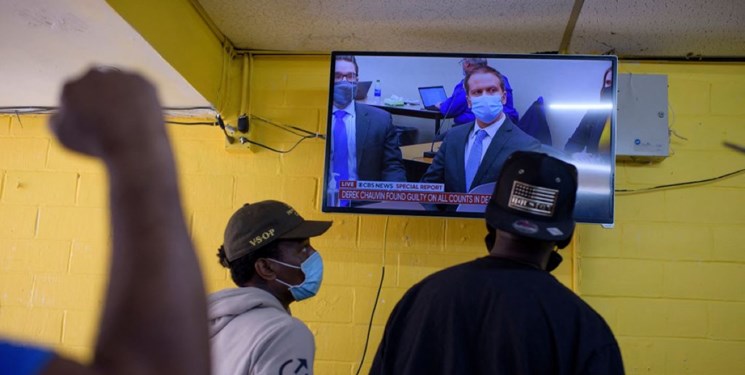 TEHRAN (FNA)- Former Minneapolis police officer Derek Chauvin has been found guilty on all charges in the murder of George Floyd, whose death led to months of demonstrations against police brutality last summer.

The verdict was read late Tuesday afternoon in downtown Minneapolis. It took the jury less than a day to come to its decision, The Hill reported.

Chauvin showed no emotion in the courtroom as the verdict was read. He was handcuffed and taken into custody immediately after Hennepin County Judge Peter Cahill read the jury’s decision.

The trial was seen as a referendum on policing, and whether a conviction of a police officer for killing a Black person could be won.

Graphic bystander footage of the fatal arrest showed Floyd, 46, pleading with Chauvin that he couldn’t breathe as the officer pinned him to the street, his knee on Floyd’s neck.

Chauvin’s knee remained on Floyd’s neck for well over nine minutes, even after Floyd became unresponsive.

Prosecutors argued it was an intentional act that directly led to Floyd’s death, while the officer’s defense portrayed it as a normal form of police work.

Chauvin’s legal defense also rested on the idea that other factors led to Floyd’s death, a premise rejected by prosecutors.

Particularly, Chauvin defense lawyer Eric Nelson unsuccessfully argued that Floyd died from the drugs in his system at the time of his arrest and underlying heart disease.

It was known that Floyd struggled with opioid addiction and trace amounts of fentanyl and methamphetamine were found during the county medical examiner’s autopsy. The autopsy also found that Floyd’s heart was slightly enlarged and several arteries were significantly occluded.

However, Hennepin County Medical Examiner Andrew Baker stated in his autopsy report that Floyd’s cause of death was “cardiopulmonary arrest [the stopping of both the heart and lungs] complicating law enforcement subdual, restraint, and neck compression”.

Baker described both the drugs in Floyd’s system and his heart disease as contributing factors but said that neither were direct causes of Floyd’s death.

He also categorized Floyd’s death as a homicide, which in medical terms simply means death at the hands of someone else.

During his testimony, the doctor made it clear that his opinion of how Floyd died had not changed.

In addition to Baker, the prosecution called forth numerous other medical professionals who testified that Floyd died from low levels of oxygen, also known as asphyxia.

Several officers from the Minneapolis Police Department also testified against Chauvin — a rare occurrence in a case like this — explaining to the court that Chauvin’s conduct was not something trained by the force.

Minneapolis Police Chief Medaria Arradondo was one of the members of the department who took the stand, vehemently condemning what Chauvin did.

Minneapolis and other cities around the country had braced for an opposite verdict, with many mobilizing their national guard and declaring a state of emergency.

President Joe Biden stated Tuesday that the conviction of Chauvin of the murder of Floyd is a step forward toward ensuring racial justice in America, but he stressed that more must be done.

“We can’t leave this moment or look away thinking our work is done,” Biden noted in remarks from the White House hours after the jury returned a guilty verdict in downtown Minneapolis, adding, “We have to listen, ‘I can’t breathe. I can’t breathe’. Those were George Floyd’s last words. We can’t let those words die with him.”

“We must not turn away, we can’t turn away. We have a chance to begin to change the trajectory in this country. It’s my hope and prayer that we live up to the legacy,” he continued, stating that “this can be a moment of significant change”.

Biden urged the Senate to pass police reform legislation named after Floyd that was approved by the House earlier this year, noting that it has been nearly a year since Floyd was killed in police custody last year as Chauvin knelt on his neck for about nine minutes.

Biden also said that his Justice Department, led by Attorney General Merrick Garland, was committed to restoring trust between law enforcement and the communities they are paid to protect.

He added that “most” police officers serve communities honorably but stressed that those who don’t must be held accountable for misconduct, characterizing Tuesday’s verdict as a signal that no one is above the law and a step toward ensuring bad actors in law enforcement face consequences.