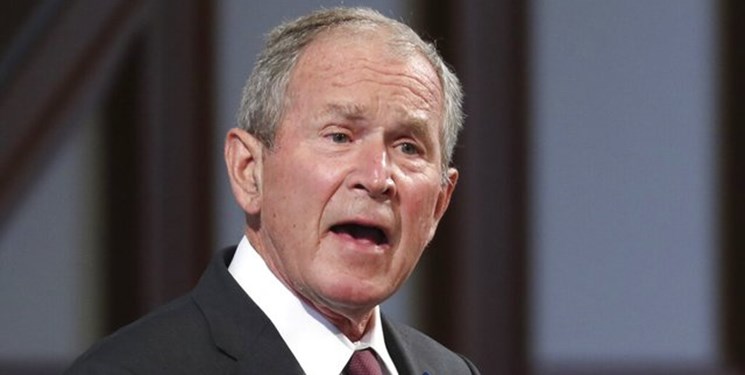 TEHRAN (FNA)- Former President George W Bush said the Capitol riot "made me sick", but stopped short of blaming successor Donald Trump for the Republican Party’s transformation to being "isolationist, protectionist, and to a certain extent nativist".

In a pair of interviews to promote his new book, Bush continued his rehabilitation from the president responsible for entering devastating and lengthy wars in Iraq and Afghanistan to the close friend of the Obamas more known for paintings in “Out of Many, One: Portraits of America’s Immigrants”.

Bush told CBS Evening News anchor Norah O’Donnell that he couldn’t believe "what the hell" was going on as he watched rioters assault the US Capitol on January 6.

"It was a terrible moment in our history, and it’s going to be a part of our history. I’ve been watching all the prosecutions and stuff. And, you know, people deserve to be busted," Bush said.

"And, uh, I’m not going to cast blame. I know what your next question is, I’m going to let it go, but it’s disgusting," he added.

Bush has previously condemned the Capitol riot as how "election results are disputed in a banana republic", and decried the “reckless behaviour of some political leaders since the election". But he has purposefully refused to name or apportion responsibility to any one person or group.

Pressed why he wouldn’t specify blame for either the riot or the direction of the Republican Party, Bush leaned on the tradition of former presidents staying out of current politics.

"You know, trying to guess the motivations of riled up people, history’s going to assess the blame when time goes on. There’ll be more data coming out," Bush said.

"One thing’s for certain, it’s just a sorry chapter, sorry moment, really sorry. This sends a signal to the world, we’re no different. And this book says we are different, much different,” he added.

In a separate interview on NBC’s Today to further plug his book, Bush told host Hoda Kotb the current direction of the Republican Party wasn’t "exactly my vision", but that "I’m just an old guy they put out to pasture".

Asked if he has ever been tempted to speak out, the 43rd president laughed.

“What’s really troubling is how much misinformation there is — the capacity of the people to spread all kinds of untruth,” he added.

“I don’t know what we’re going to do about that. I know what I’m doing about it. I don’t do Twitter or Facebook or any of that stuff,” he said.

Bush repeatedly refused to speak out on presidential politics during the 2020 campaign, despite putting out multiple statements throughout the cycle to lament the deaths of George Floyd and Ruth Bader Ginsberg, and congratulate both Joe Biden on his win, and Trump on his campaign.

While he has kept quiet on the 45th president, Bush has keep a closer relationship with presidents 44 and 46.

Biden said last week that he spoke to Bush before announcing that the US would withdraw troops from Afghanistan before the 20th anniversary of the September 11 terrorist attack that led to the wars that defined Bush’s presidency.

Asked whether it was the right decision to withdraw from the country, under a deal negotiated by the Trump administration, Bush said “time will tell”.

“My first reaction was, ‘Wow, these girls are gonna have real trouble with the Taliban,’” he said, adding, “A lot of gains have been made, and so I’m deeply concerned about the plight of women and girls in that country,” he said.

“I think the administration hopes that the girls are going to be OK through diplomacy. We’ll find out. And all I know is the Taliban, when they had the run of the place, they were brutal,” he added.