Philippines’ President Threatens China with War, Admits May Not Be Able to Win 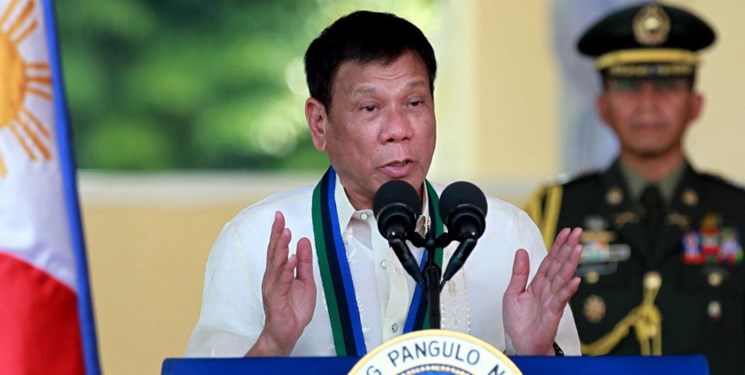 Duterte made the remark in a televised address late on Monday, while noting that a conflict with China would not end “without any bloodshed” and Manila might not be able to win such a confrontation, presstv reported.

“If we go there to assert our jurisdiction, it will be bloody,” Duterte said. However, he claimed that “there is no other way but a war” to enforce a 2016 Hague tribunal ruling that confirmed the Philippines’ sovereign rights in its exclusive economic zone.

“We can retake it only by force. There is no way we can get back what they call the Philippine Sea without any bloodshed,” he said.

The Philippine president further said he was “not so much interested” in confronting China over fishing rights in the disputed waterway.

“I’m not so much interested now in fishing. I don’t think there’s enough fish to quarrel about,” Duterte said.

“But when we start to mine, when we start to get whatever it is in the bowels of the China Sea, our oil, by that time, I will send my grey ships there to stake a claim,” he said, referring to Philippine naval ships.

The remarks came after hundreds of Chinese vessels were spotted at the Julina Felipe Reef, a disputed coral reef that is miles West of the archipelagic province of Palawan, as well as other parts of the West Philippine Sea.

Meanwhile, Philippine Defense Chief Delfin Lorenzana said naval ships can patrol the country’s exclusive economic zone, after the president said that “nothing will happen” if the nation sends its ships “because we are not in the possession of the sea”.

The latest development comes at a time of heightened tensions over the disputed South China Sea islands between the two countries in the past weeks. The Philippines has repeatedly protested China’s presence and has deployed more vessels in disputed areas.

Duterte’s hostile remarks come even though he had tried to seek rapprochement and cooperation with China since coming to power some five years ago.

China has rejected the claim, saying the boats were sheltering from rough seas and no militias were on board.

Reports said as many as 200 Chinese ships had berthed at Whitsun Reef, approximately 320 kilometers West of Palawan Island, and within the Philippine EEZ.

Manila had earlier urged Beijing to withdraw the ships, calling their presence in the area an “incursion into its sovereign territory.”

Parts of the South China Sea, which are said to be rich in untapped oil and gas reserves, are claimed by China’s neighboring countries, including the Philippines.

The Philippines won an arbitration case on the dispute at The Hague-based International Court of Arbitration in 2016, which rejected Beijing’s sweeping claims to much of the disputed waterway. China rejected that ruling as void.

The United States, which sides with Beijing’s rival claimants in the maritime dispute, routinely sends warships and warplanes to the South China Sea to assert what it calls its “right” to “freedom of navigation”, ratcheting up tensions with China.

Beijing has constantly warned the US against its military activities in the sea, saying that potential close military encounters by the air and naval forces of the two countries in the region could easily trigger accidents.