Precise Footage of US Aircraft Carrier Taken by IRGC Drones 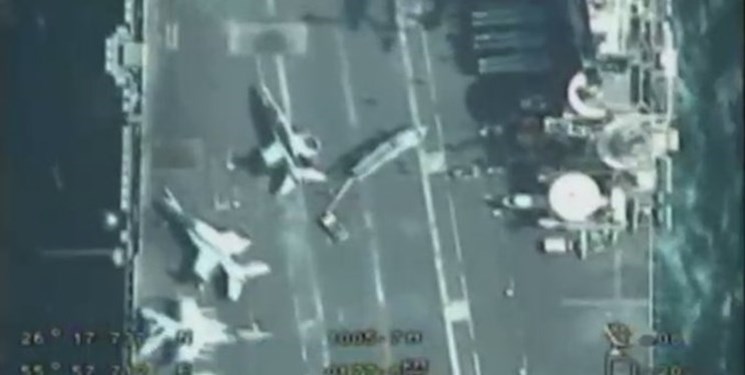 TEHRAN (FNA)- The Islamic Revolution Guards Corps (IRGC) released a video captured by its drone fleet of an American aircraft carrier which displays the vessel with thorough details.

The IRGC released the footage on Wednesday as means of vividly portraying its state-of-the-art advancements in the field of drone technology, presstv reported.

The video recorded by an apparently four-strong drone squadron, provides real-time and remarkably close details of every warplane as well as other military aircraft and equipment deployed on the carrier.

The drones also captured what appears to be a support vessel sailing alongside the main vessel.

The IRGC footage shows UAVs of various makes, including the ones used for recording the video of the carrier, either taking off or roaring by across the sky.

The second part of the footage is entitled to precision attacks by the Corps’ kamikaze drones as they are hitting various targets, including a tank.

The UAVs are seen slamming into the targets with surgical accuracy and smashing them into smithereens.

This is not the first time, the Corps, which is Iran’s elite defense force, flaunts its achievements and prowess in the area.

Last September, it released images of a US strike group near the Strait of Hormuz in the same strategic waters.

The Corps and the Iranian Army fielded their drones alongside numerous other defensive means at their disposal in a set of 20 countrywide military exercises in January.

The back-to-back drills went underway as the US and its allies had stepped up their provocative maneuvers in the Persian Gulf.

Meanwhile, the head of the US Central Command, which oversees the American forces stationed in the West Asia region, revealed to the US Congress that the Iranian drone power had stripped the American air force, of what the commander called, its upper hand in the world.

General Frank McKenzie was commenting in a written testimony to the House Armed Services Committee, when he noted how Washington was daunted by Iran’s far-and-wide application of small- and medium-sized drones for surveillance and attacks.

Iran’s widespread use of the aircraft for the purposes, he said, meant that “for the first time since the Korean War, we are operating without complete air superiority.”

“Until we are able to develop and field a networked capability to detect and defeat UAS (unmanned aerial systems), the advantage will remain with the attacker,” he said.

Iran, therefore, poses a daily threat to the US and its allies in the Middle East as America’s military superiority in the region wanes, the general said.